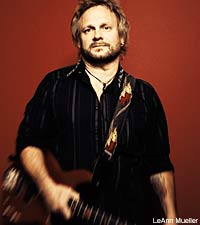 Maybe the most surprised people on the planet when Chickenfoot -- the band featuring former Van Halen boys Sammy Hagar and Michael Anthony, as well as Joe Satriani and Red Hot Chili Peppers' Chad Smith -- entered the Billboard top 200 in the top five was Chickenfoot themselves. "It blew my mind when we debuted at #4, because in this day and age, especially a lot of so-called supergroups, people know for the most part it's just something that's thrown together. Try to throw the best musicians together or something for something that's got sellability and it's not a long-term deal," Anthony tells Noisecreep.

But Chickenfoot is a long-term deal, he insists. But as has been well-documented, Smith is back in the Red Hot Chili Peppers' fold. So how does Chickenfoot deal with the hiatus while keeping going? "It won't be until he's in the studio with them and sees what they're gonna be doing. Then it'll kind of determine what we're going to do," he says. "We worked it around Joe's schedule last year when we were doing the album. Chad's schedule might be a little bit more intense than Joe's, but we'll make it work because that's how we did it in the first place."

While they're figuring that out, Anthony has some plans of his own. "Sammy and I have been playing together and we're always thinking of putting some things together. I'd actually been thinking of doing a thing with a bunch of different musicians and doing some cool cover songs," he says. Who's on the wish list then of guys it'd be cool for him to "jam" with?

"I know Billy Gibbons from ZZ Top. It'd be really cool to do stuff with him. I've jammed with him a couple of times. And then there are a lot of younger musicians, too; I'm good buddies with Mark Tremonti, who's in Alter Bridge and Creed and we talked about doing a couple of things together," he says. "Obviously, I could say Paul McCartney, this guy and that guy and it'd be a great experience, but someone like that? I'd just want to sit and talk with him about a bunch of s---."

With the success of Chickenfoot, though, and the great response the band had on the road, that remains Anthony's priority. "As far as going out and touring, I love this right now. That's why I hope it continues on," he says. "I know it will continue on. It's just a question of when and it could be later than we think or a lot sooner than we think."