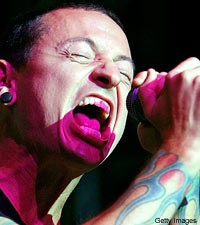 As part of Linkin Park, Chester Bennington writes lyrics that both he and his band mates can relate to and feel comfortable singing. But in his own project, Dead by Sunrise, a collaboration between himself and Julien K that Bennington is fronting while on some down time from LP, the vocalist is holding nothing back, especially lyrically.

Among the themes he explores heavily is his own battles with addiction. "My life was falling apart in many ways that I was writing about on this record in terms of getting divorced, in terms of diving very hard into alcohol and drugs throughout this process," he confessed to Noisecreep.

In 'My Suffering, which he describes as a song "literally about [how] being an alcoholic and a drug addict has paid off for me in many ways," he discusses how his addiction has helped him creatively. "I have been able to tap into all the negative things that can happen to me throughout my life by numbing myself to the pain so to speak and kind of being able to vent it through my music," he said. "'Crawling,' for example, by Linkin Park, is probably the most literal song lyrically I'd ever written for Linkin Park and that's about feeling like I had no control over myself in terms of drugs and alcohol. That feeling, being able to write about it, sing about it, that song, those words sold millions of records, I won a Grammy, I made a lot of money. I don't think I could've been inspired to create something like that by watching someone else go through that. So in a lot of ways that's been very constructive for me."

A lot of artists would never be that frank about their addiction, but Bennington said that's not his style. "I'm not one of those guys who thinks being anonymous is all that great," he said. "I don't have a problem with people knowing that I had a drinking problem. That's who I am and I'm kind of lucky in a lot of ways cause I get to do something about it. I get to grow as a person through it. It's kind of a cool thing. It's not cool to be an alcoholic, meaning it's not cool to go drink and be a dumbass. It's cool to be a part of recovery. This is just who I am, this is what I write about, what I do, and most of my work has been a reflection of what I've been going through in one way or another."