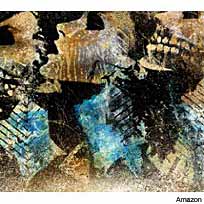 Cave In and Converge share more than just the first letter of their name and a connection to the New England hardcore scene. In fact, Cave In frontman Stephen Brodsky once filled in as Converge's touring bassist, and Converge drummer drummer Ben Koller has played in both bands. When the two bands toured together back in 2004, they collaborated on a one-off studio session that became known as Verge-In.

The sessions, which Brodsky described at the time as "like this freaky mix of Ride the Lightning-era Metallica meets Mars Volta meets the Allman Brothers," never saw the light of day, and reached mythic status among fans of both bands. However, Brodsky recently confirmed to Noisecreep that 'Effigy,' a track on Converge's current album 'Axe to Fall' that he and bandmates drummer J.R. Connors and guitarist Adam McGrath appear on, is a track that was written during the sessions.

"That was actually one of the pieces from the Verge-In sessions that we did together shortly before we toured the U.S. in 2004," Brodsky says of 'Effigy.' "It was one of the better songs that all of us came up with under that name. The idea was to put out some sort of release at some point. But as with anything that has too many cooks in the kitchen, the project got delayed, and certain people felt one way or another about the pieces we came up with, and in the end, there was a very small portion of material that everyone could agree on."

Calling the session a "bigger project than anyone had anticipated taking on," Brodsky is just glad to have played on another Converge record, and doesn't rule out some more of the material eventually being released -- as far as he's concerned, anyway. "There's actually a couple songs from that recording session that I personally feel very fond of that I would love to put the finishing touches on," he says. "But it's not really up on anyone's priority list right now, and I know the Converge guys are in the middle of touring on this record, and the holidays are coming up. It's hard to say what the future holds, with these kinds of things, you just kind of take it day by day."

Cave In's latest EP, Planets of Old, is available on vinyl now from Hydra Head. It will be issued on CD with a DVD of their July reunion show in Allston, Mass. on Jan. 26.