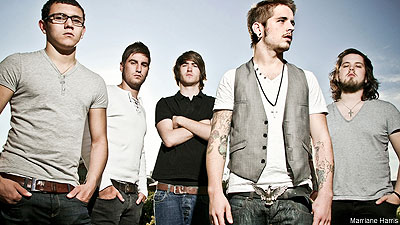 U.K.'s Bury Tomorrow will release their Artery Foundation debut, 'Portraits,' on March 16. The title track is based on the Brit lit story of Dorian Gray, a hedonist who becomes immortal after a portrait of him is commissioned. On a deeper level, 'Portraits' depicts a person, real or fictional, frozen in time, at any given moment. That's how these Brits see their music in 2010 -- memory in musical form.

Despite the somewhat high-brow perspective, drummer Adam Jackson told Noisecreep, "We definitely aren't the biggest art connoisseurs there are, so don't be fooled by the album title!" As for his favorite actual portraits? "My two favorite -- and only -- paintings are hanging in my room at home," the drummer said. "They both have a military theme. One depicts a particularly historic battle scene from the Napoleonic war, and the other is from the battle of Rorke's drift in 1879, between British soldiers and the Zulu warriors."

Jackson is fond of military movies, so these pieces appealed to him. But they are also of sentimental value. "They were handed down by my grandmother," he revealed. "I think both act as inspiration for me: that no matter what the odds, you can achieve your goals if you work hard enough. That's certainly something that we, as a band, keep striving for."

So what's the Bury Tomorrow portrait look like in 2010? It involves the wide open road! "We basically plan to tour as much as possible and visit as many different places as we can in support of the record," Jackson said. "We want to let our music do the talking. We worked hard on the album and it's a culmination of years of effort. Our biggest fear is to not give this album a chance by not taking it to as many people as possible. We all love visiting new places and to get the chance to do that through playing our music is an amazing thing. We fully intend to take advantage of the opportunity we've been presented with. We have confidence in our music and love making that intimate connection with fans at a live show."

That includes stops in America, a place that Jackson says the band has dreamed about touring. "We honestly cannot believe we are getting the chance to tour there, we never thought that would happen," the drummer said. "The style of music we play is one normally associated with American bands, and there aren't many bands doing it in the U.K., and as such, it can be hard to establish yourself in the underground scene. Kids just normally look to the States to get their fix of metalcore, and don't notice that sometimes it's right under their noses at home." Bury Tomorrow are happy to leave their homestead, though. "We're gonna have a great time with the other bands on the tour as well as all the fans," Jackson said. "Oh, and we're really stoked on eating your food. There's so much to choose from."