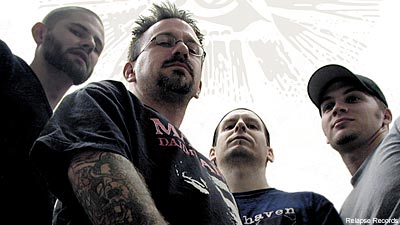 Over the last decade or so, some truly amazing bands, for whatever reason, have elected to cash in their proverbial chips well before their time, despite being at the height of their innovation. Sometimes, these bands think better of the move, and regroup, whether for a tour, an album, both, or indefinitely. New Jersey's Burnt by the Sun was one of those bands that called it quits before they probably should have, and is one of those bands that's since reunited. However, BBTS isn't back in it for the long haul.

When 'Heart of Darkness,' the band's first album since 2003's 'The Perfect Is the Enemy of the Good,' drops August 18, that's it. Enjoy those ten songs because, unless you pick up the Japanese import (which will boast some additional bonus demos), that's the last you'll hear from Burnt. Probably.

"Honestly, I think this is the last record," bassist Teddy Patterson tells Noisecreep. "Whatever we tour on this will be our last shows. We've been talking about doing things beyond this, so...this is definitely the last Burnt (by the Sun) record. As far as the last conversations we've had, this is it, and I thought we were going to do a little more, but after talking to everyone else, they all think its really time to end it good, and that's it. And we really feel like this record really puts the exclamation point on the end of the ten years, and that's it."

The album, which will come with a bonus DVD featuring an hour-and-a-half of footage and videos, fulfills the band's contract with Relapse Records, and frees them up to do other things. Patterson said it was the "hardest record any of us has ever done," but that the disc "accomplished what we set out to do," which was to progress the band's sound while still returning to the style of their first EPs. He's happy with how the record turned out, and wishes the band could do more. But, that's it, folks. Probably.

"You can't rule anything out," he admits, when asked again if this disc, which tackles the duality of humanity and "trying do something that's moral and good, and watching it deteriorate into something it wasn't intended to be," is really BBTS' swan song. "You never know."

Other than a month-long tour in Europe, Burnt By the Sun won't be touring much in the U.S. Patterson says the band may arrange a few east coast dates, and that they've made themselves available, but so far, nothing in terms of a tour has been firmed up. That's fine by him. Like the rest of the guys in the band (save for drummer Dave Witte, who is also in Municipal Waste), Patterson's got a wife and kids to worry about, so touring for a year wouldn't be feasible regardless. He is keeping busy, though, and will be working on two different side projects with Jon Chang called Gridlink and Hayaino Daisuki.