Next month, Southern Californian bad boys Buckcherry will release Confessions, their sixth studio album. A concept record based on the seven deadly sins, vocalist Josh Todd turns in his most impassioned performances yet.

If "Gluttony," the lead single off of Confessions, is any indication of what the rest of the album will bring, we're all in for an ass-beating! The riff-rocker is both hard-hitting and undeniably hooky. What else would we expect from Buckcherry?

In this Noisecreep exclusive, we're bringing you the premiere of the "Gluttony" video!

"The concept of the video is excess, consuming everything excessively, and moderation is not even in the equation," Todd told Noisecreep abut the clip. "I'm very familiar with that, and a lot of guys in the band are familiar with that. Because the record is called Confessions, we filmed the video in a church, we got Jesus down here - which is killer - and we got a lot of our fans in it, which is amazing – they came out on their own time and have really put in a lot of sweat equity, so thank you to them."

Buckcherry are in the middle of a North American tour and beginning Feb. 2 in Kansas City, Mo., they'll be joining Kid Rock as special guests on the upcoming "Rebel Soul" Tour.

Confessions will hit stores on Feb. 19 via Century Media. Pre-order the CD/DVD Deluxe edition at this link. 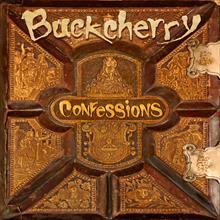 With Kid Rock and Hellbound: