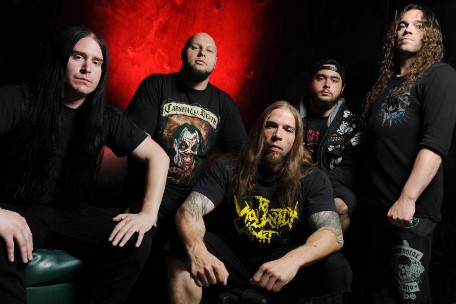 Broken Hope are one of those death metal bands that were more popular after they broke up than when they were actively making records. Bassist Shaun Glass went on to form the more mainstream rock band SOiL and the thrash combo Dirge Within, while guitarist Jeremy Wagner became an accomplished and published author.

Still, a new generation of fans remained curious about and interested in Broken Hope, so demand for more music and/or live shows remained high. Now reunited and signed to Century Media, the group is ready to reclaim their spot in the death metal elite.

Noisecreep spoke to Wagner about the impetus for Broken Hope coming out of retirement, what to expect on the new album -such as a self-cover- and how he feels about animal rights.

Catch us up and tell us why Broken Hope really are back.

In the '90s, we released five full-length albums with Metal Blade, after forming in 1988. We went on hiatus in 2000. In the past 12 years, the fan mail never stopped. Handwritten letters came to the P.O. box that I still managed. Promoters and fans were asking us to put Broken Hope back together. We had talked about the original lineup. All the guys met, but [original singer] Joe [Ptacek] had killed himself, so that set us back and we had to rethink doing this without Joe. We got approached by management, who brought us a great deal with a North American tour and label interest.

It made sense, it seems.

It made total sense. Shaun and I had been talking about it. We had the right lineup. We did a tour with Obituary in the fall; most of the shows were capacity crowds, and it was a great way to come back. We signed to Century Media and we're writing the new album and will record this spring. It should come out in late summer. It's a return to form. You'll know what to expect. It's our brand of death metal. It's great to be back. I didn't see it coming so quick. Shaun and I talked about it, jammed with a drummer, and thought, 'We'll get the right lineup,' but the interest in the band that never wavered seemed to grow and grow. We're more popular now than in the '90s.

Why is that? Is it nostalgia? Is it people stumbling onto the band and the music later in life, and after the fact? Is it passionate death metal fans who just weren't old enough to enjoy it during the band's first run?

It's nostalgia --people our age-- but also that generation of fans who love the band, sincerely, but never got to see us. I've met people on tour when we would do these signings at our merch booth. I met people saying, 'I remember seeing you in Montreal in 1997 and by the way, this is my daughter, who is now 18' and she is wearing a Broken Hope shirt. She'd never thought she'd see us.

So it's two parts. It's old fans seeing us again and a new generation of young death metal fans. I guess it could make me feel like I'm old. I really don't think like that. I am in awe of it.

Since death metal is so underground, how did this new crop of fans find it?

Our drummer is younger than Shaun and I. We're in early 40s and he is a killing machine who is 21-years-old. When we met him, he was wearing a vintage Napalm Death shirt and a vest with patches of bands I didn't think someone his age would hear of, like Terrorizer and other punk bands.

We have an extreme metal legacy that stands the test of time. That's no diss on any new bands since I love a lot of new death metal, but we have material that is standing up as being excessively uncompromising, and brutal and ferocious.

What can you share about the new album? Any scoops?

It's 12 brand new songs is the goal and we're going to try re-recording a classic track off the first album [1991's Swamped in Gore] as a bonus track. Also, there maybe one or two bonus tracks that may be covers or we may squeeze out one more original. We are not effing around [Editor's Note: He did say "effing."] It has blast beats, breakdowns, hooks and is like being hit with a sledgehammer.

Which classic track will you re-record?

We've been talking about "Incinerated," the first track on our debut after the intro. We may bring it back into the live set.

Will you just re-record it with the new technology that is available to you, or will you add any new parts to it?

We will just re-record it, but we may add a guitar solo, since there isn't one in the original; we will give it the 2013 Broken Hope treatment. Dying Fetus did a cover of our song "Gorehog." They added a solo that was not there before. Given what they did -- and they did great job -- maybe we can throw in something special.

If a band covering your song can add a solo, then you can do whatever you want when you "cover" your own track.

Anything else you can tell us?

My wife and I have the means to donate to nonprofits. We donated to a no kill animal shelter and I am writing a song called "Inhumane Society," which is the working title and it's about animal abuse: dog fighting, factory farms, all that shit, which I am totally against. It might be the first Broken Hope song, lyrically, that is not meant to shock people, but to make people thing about creatures on this earth that deserve ethical treatment and love.

Head over to BrokenHope.com and the band's official Facebook page for more info on the band and their upcoming shows.