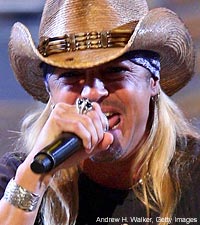 There have been a few updates on ailing rocker Bret Michaels of Poison fame. According to a post on his official Facebook page, Michaels remains in critical condition and under 24-hour supervision, as the first week and a half after a brain hemorrhage are the most crucial, since additional complications may arise. Head and brain injuries are no joke.

The post read: "We thank you for your continued support and well wishes. Bret remains in critical condition in ICU under 24 hour supervision by doctors and medical staff. If a patient survives the initial rupture, the first seven to 10 days after are the most critical as an additional rupture or other complications may arise."

It continued, "Doctors are also continuing to treat Bret for the hyponatremia and today he will be undergoing more testing as well as an additional MRA. There will be a press conference on Tuesday at which doctors who have been treating Bret will further explain his condition, treatment and prognosis. Location and time of the press conference will be released Friday."

The outpouring of love and concern for Michaels has been massive, leading his official website, www.BretMichaels.com, to lag and have outages. His camp is keeping fans and the media well informed on his progress. Michaels' publicist said in a recent interview that Michaels hopes to be back on the road by the end of next month. A statement posted on his site said, "While Bret is recovering, we obviously have some shows that are being rescheduled. We are working to reschedule dates from now until May 21."

Let's hope Michaels' recovery is as ambitiously speedy as his camp hopes, but we won't hold it against the guy if he cancels all dates and takes the summer off to fully recuperate, as his health is priority numero uno. He had been scheduled to tour with Southern rock purveyors Lynyrd Skynyrd.