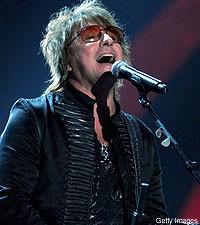 When it comes to Bon Jovi's world tour, which starts in Seattle on Feb. 19, fans can expect variety, according to guitarist Richie Sambora. "Well the reportoire is going to be vast let's put it that way," Sambora said during a recent teleconference. "We're going to go back and we're going to play some stuff that we haven't played in 20 years like, stuff from the maybe first two albums. And we have so many records to choose from and so many songs to choose from.

"We sold out the three nights at Giants Stadium and I think we're putting up four and five next week. I think Kid Rock is going to be accompanying us for nights four and five at Giants Stadium which will be a great show for people. And then when you're doing like 15 nights. We're doing like 15 nights at the O2 in London we're going to be a lot of different stuff. I think, you know, there'll even be stuff like we might do 'Slippery When Wet' in its entirety or 'Lost Highway' in its entirety, you know, stuff like that."

Also, during the course of the tour, the band may do its most recent album, 'The Circle,' in its entirety as well because, Sambora said, "We're really, really proud of this record and proud of the evolution that happened with this record for us as far as musically and songwriting and all that stuff."

He said because Bon Jovi are playing 135 shows in 30 countries on this jaunt, they need to keep themselves interested and happy. "Obviously, we're going to pick songs from different records and, you know, kind of interject them into the set as time goes on," Sambora said. "And I'm sure we'll take fans requests. A lot of times fans also like, call into the fan club and say, 'Hey play 'Dry County'" or 'Play some obscure stuff that like 'Hardest Part Is a Night' off the second album."

During 'The Circle' tour there will be two stage formats -- one for stadiums and one for arenas, Sambora explained. "The arena production entails things where it's almost like a half circle," he said. "It'll be a ramp that goes off of the stage. There'll be in that kind of pit that'll be the VIP section. But there'll be also some tickets available to the public in that section also. And it'll be 360 we're selling in the round although we're not going to be in the middle."

Sambora said there will be "crazy" aspects as well, such as -- believe it or not -- robots. "We have robots that actually move the video screens around the stage -- pretty intense stuff," Sambora said. "It's going to be a lot of fun so. Come see us it'll be spectacular that's for sure."