The shows, all presented in intimate settings, will consist of spoken word, a Q&A session, and an acoustic set of songs never before heard, as well as stripped down and softer versions of Blue October fan-favorites.

Tickets are on sale now and can be purchased at BlueOctober.com > Tour.

"I always look forward to the spoken word/solo shows," said Furstenfeld. "The fact that I'm sitting just a few feet away from the audience, that there are no rules as to what they ask me, or that I don't have boundaries on my answers, is what is exciting to me. I'm hoping that the evening will give everyone a chance to dig deep, connect, and explore the dark corners of why honesty, no matter how brutal, remains one of the most beautiful aspects of being human. Through poetry, music, and conversation, we heal. Why not do it together."

"An Open Book: An Evening With Justin Furstenfeld" will support the release of Crazy Making, the expanded third edition of Furstenfeld's book of lyrics, hand-written notes and personal photographs. The book, featuring more than 80 new pages, includes all lyrics from Blue October's albums and EPs, from 1998's The Answers through to 2011's Any Man In America, as well as lyrics from a dozen unreleased songs. The new edition also includes some very personal insights into Furstenfeld's creative thought process through the past few albums, not published in previous editions. Crazy Making will be available at all of the "Open Book" shows, as well as, for the first time, at Amazon.com and other online retail outlets on April 1. 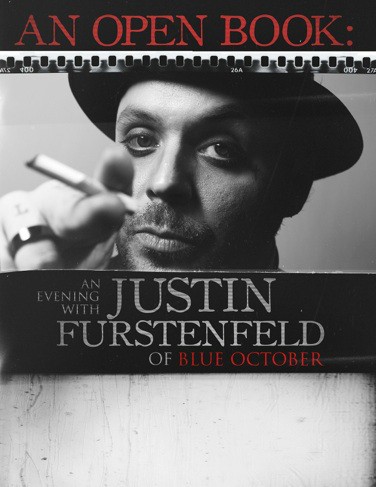 Confirmed dates for "An Open Book: An Evening With Justin Furstenfeld" are as follows: