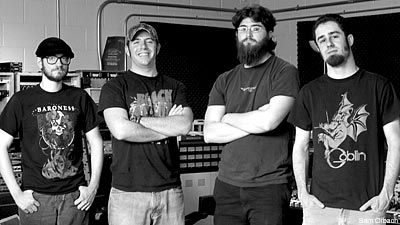 "We don't mind the comparison," guitarist and vocalist Josh Primack confessed to Noisecreep of the Chicago band's tag of sounding like Mastodon. "It's an honor to be mentioned in the same breath with them."

Having only been playing since 2007, Blood of the Tyrant have quickly been put into the list of bands worth keeping a watch on, and their last self-released EP even got them praise from outlets like Decibel. Most reviews have noted the remnants of older Mastodon in their sound, which is why many are excited about that band. Though Mastodon's 'Crack the Skye' is currently laying waste to numerous year-end lists, chunks of older fans have not enjoyed the more singing, less unrelenting onslaught approach the band has taken. For those that feel Mastodon have changed too drastically, Blood of the Tyrant will happily take those ears.

Primack attested that they never set out to sound this way; their influences just took hold in a certain manner. "Part of the reason why people may draw a parallel between Mastodon's music and ours is the fact that both bands share many common influences," he explained. "Mastodon has made public their adoration of older classic rock and progressive music from the 1970s -- bands like Genesis, King Crimson, Yes and Thin Lizzy -- and all of these are bands that Blood of the Tyrant hold in extremely high regard and count as influences of our own."

In the tradition of those bands of heaviness and composition, the four members of Blood of the Tyrant spend a lot of time crafting their complicated songs containing swirling riffs and traveling melodies. "It usually takes us a few months to finish writing and arranging a song, because we want it to be as close to perfect as possible," Primack declared.

"The embryos of our songs often arise from just a single guitar part or a couple of melody lines. If those initial bits of music are strong enough, we will be able to hear in them the soul of a new song with its own unique vibe and vision," he continued. "Once this happens, we can start writing more music specifically to suit the mood and aura that we feel the music projecting to us. Eventually, the song begins to take on a life of its own."

But as would be expected of any band that spends this much intense time working in close quarters, tensions can get pretty bad. "The time that we spend composing music together can actually become very heated and tense at times, because we want every tiny nuance of the music to be absolutely perfect. And we often have different definitions of what 'perfect' means. We're a lot like Lexus: 'The Relentless Pursuit of Perfection.'"