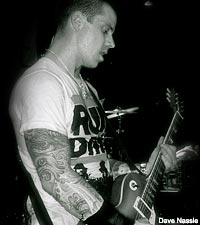 Former No Use for A Name and Infectious Grooves guitarist Dave Nassie has a new gig. He's now shredding for Orange County's ever-fashionable, always musically raging Bleeding Through. Nassie hadn't offiically spoken to the press since the band announced his membership, so Noisecreep was more than thrilled to be the first outlet to talk to the guitarist. Nassie took over for Aussie Jona Weinhofen, formerly of I Killed the Prom Queen, who left BT after a two year stint, during which he replaced original guitarist Scott Danough.

"I am ready to earn the respect of the many devoted Bleeding Through fans," Nassie said to Noisecreep. "We are looking forward to the months ahead. The band has currently begun preparing for the the writing process that will give way to another record to be recorded next year."

The band will play a spate of shows in Mexico in July and there are a few domestic tours being hammered out by the band's business associates. But Nassie is ready to roll up his sleeves and dive right into the thick of things with his new mates. "I am really looking forward to finishing the cycle of 'Declaration' and working with my friends for what we see as a bright future for the band." The fate of BT's next record - as in which label will have the privilege of releasing it - remains to be seen.

Bleeding Through Tour Dates
on TourTracker.com

Filed Under: Bleeding Through, BleedingThrough
Categories: News
Comments
Leave A Comment
Back To Top