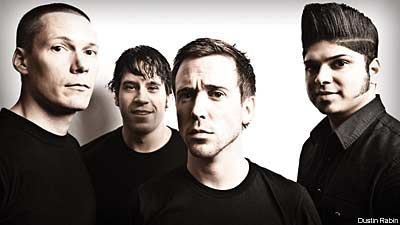 Canada's Billy Talent, one of the country's biggest new rock bands, released their new album, 'Billy Talent III,' in America today and are currently on tour with Poison the Well until Oct. 9.

"At first, we were really nervous -- there's the word. We were working with our dream producer; we're in L.A.; we've never recorded outside of Canada before. And everyone's recorded there pretty much," Kowalewicz says of Henson, the former A&M studios.

"It's a very well respected place and we're intimated by that as well because we're going, 'This is expensive and we don't want to f--- it up,' but I think definitely at the beginning was kind of weird and then towards the end was amazing. Now, if I had the opportunity or the privilege to work with Brendan again, I wouldn't be as nervous or scared because I know his approach and I know the way he works. "

The album is deep, dark and still aggressive, but not a full-out assault, like many of the songs on 2003's 'Billy Talent' and 2006's 'Billy Talent II.' Kowalewicz is also singing far more than screaming, which immediately gives this album a different sound.

"There's not a lot of screaming on this record," he says. "I think when it's the right time to scream, and it makes sense, then you should do it. It's not something I really think about. "

But his voice sounds better than ever on 'Billy Talent III' as well, perhaps something that has come from touring or working with O'Brien.

"I realize that I have a unique way of singing and my voice sounds unique," says Kowalewicz, whose singing style sometimes recalls that of John Lydon's.

"I always used to be a little intimated by that. But now I feel really comfortable with it. I've accepted my voice and I think my singing on this record, I feel really proud of it, and I've never really felt overly proud about the work I've done. It's just been like, 'Yeah it's good. I'm happy with it.' But now I'm like, 'Wow, I really like the songs and what I'm doing on them."