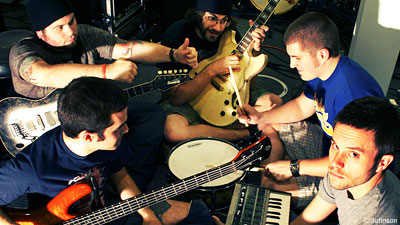 On Nov. 27, the same day they released their latest LP, 'The Great Misdirect,' Raleigh, N.C.-hailing progressive metallers Between the Buried and Me have revealed they'll be touring the U.S. in early 2010 with Cynic, Scale the Summit and the Devin Townsend Project. The trek will be Between the Buried and Me's second headlining run in support of the new disc, and the tour's first gig marks the Devin Townsend Project's live debut.

In addition, Between the Buried and Me have scheduled a record-release show for 'The Great Misdirect' on Halloween at the Orange Peel in Asheville, North Carolina. During the gig, the band will be performing the entire new CD "plus some oldies." The band embarked on a U.S. headliner in November with Veil of Maya and Animals As Leaders.

In August, frontman Tommy Rogers told Noisecreep their new album "deals with the human brain. There's definitely a lot to do with alien abductions, and one song is about a group of people who write music in the desert, because music is outlawed across the entire Earth. I get borderline obsessed with certain topics, and that bleeds into my lyrics. During the writing of this record, I got really obsessed with the human brain, magic and code, and wrote a song about all of that. I got obsessed with freaking alien abduction and stuff like that. It's basically what's in my head. I want to create stories and lyrics that go well with our music, because it is so dynamic. I want the lyrics to follow that."

The first date of the trek is scheduled for Jan. 8 in Nashville, and shows are booked through Feb. 6 in Charlotte, N.C.

Between the Buried and Me Tour Dates
on TourTracker.com

Filed Under: Between the Buried and Me, BetweenTheBuriedAndMe, Cynic, scale the summit, ScaleTheSummit, the devin townsend project, TheDevinTownsendProject
Categories: News, Tours
Comments
Leave A Comment
Back To Top