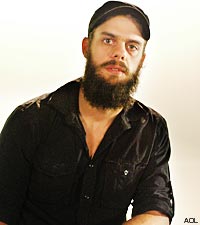 Baroness were comfortable having Kylesa frontman Philip Cope produce their 2007 disc, 'Red Album.' The musicians had grown up together in the Savannah, Ga. metal scene and had become close friends. And that's exactly why Baroness chose an outside producer for their new album, 'Blue Record.'

"We found that in the past it's been very advantageous to the band to put ourselves in situations where we're not necessarily comfortable, in order to -- in a matter of speaking -- force our hand and bring out something new," frontman John Baizley tells Noisecreep. "For this record, we wanted to be in a condition that would create that sort of internal or external struggle, by which we're able to pass over some of the windfalls that we have as a band."

Not only did Baroness decide not to work with a friend, they wanted someone with no previous experience producing metal bands. After a short search, they found John Congleton, who is best known for working with hipster indie rock darlings the Polyphonic Spree and Explosions in the Sky.

"We chose to work with him, not solely because we're huge fans of his productions in the past -- which we are -- but also because he brought no preconceptions as to how to produce our record," Baizley says. "And because he was as unfamiliar, in a certain respect, with our world as we were with his. We were able to come up with some more interesting and left-of-center approaches to the production. And you know, through that I think we were able come up with something that was a little bit more engaging and interesting for us. And you know, at the end of the day it was a risk, and we enjoy taking risks. And I feel that one of the strengths of this band is that we're willing to do that and not always go the safe route."

Going into the creation of the record, Baroness kept an open mind and were willing to try just about anything, which is one of the reasons why 'Blue Album' sounds so impulsive and unrestrained. However, there was one stipulation. They didn't want to do anything that sounded like Kylesa or Georgia metal titans Mastodon, both of whom they had often been compared to.

"Those were two bands that put out very unique-sounding records in this past year, and you know, why should we be redundant?" says Baizley. "And why shouldn't we challenge ourselves, in the face of those two records, which I felt were incredible recordings? We felt it was time to go out on a limb and find a sound that was more intrinsically ours."