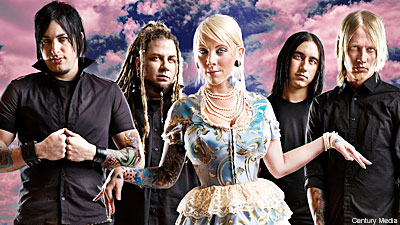 Bamboozle Left, held in the sunny, Orange County landscape of Irvine, California, boasted a broad cross-section of attendees: those with tattoos, facial piercings, multi-colored dye jobs culture-clashed with goths, emo punks and plenty of metalheads, all of which traipsed the grounds with polite and respectful curiosity. Sunday, April 5 offered the most metal-leaning lineup of the two-day event.

In This Moment guitarist Chris Howorth, who was on hand checking out the festivities, commented on the crowd and performer diversity to Noisecreep, saying "Yesterday, there was Fall Out Boy. Then there was Parkway Drive and Stick to Your Guns. But today, there's Suicide Silence and Winds of Plague. Sunday is definitely the more 'metal' day and there's a lot for metalheads to see."

Variety was the metallic order of the day on the Sabbath. There were a half-dozen stages, all within walking distance of one another. The Morrissey-inspired Dommin, with their rose-adorned mics and gothy hard rock, played concurrently with rapper Hyro Da Hero, who was also a standout.

Now why would we mention a hip-hop artist on a metal blog? Because Hyro's a rapper doling out rhymes that appeal to rock fans thanks to the DJ, drummer and guitar that back him. Winds of Plague's keyboard-driven metal was nearly deafening, as was Emmure. Straight edgers Trash Talk also made ear-splitting noise. There was no shortage of decibels at this fest!

The recently MIA Deftones, whose bassist Chi Cheng is still comatose after a November car accident, went on before rapper 50 Cent, while The Used 'eemed' and screamed it up before the daylight died. The best thing about the fest was the ability to affix metal to other scenes and genres and to see all sorts of music fans checking each other's respective bands out. The East Coast Bamboozle is scheduled for May 2 and 3 at the Meadowlands and will feature metallers like Whitechapel, Haste the Day, Vision of Disorder and others.