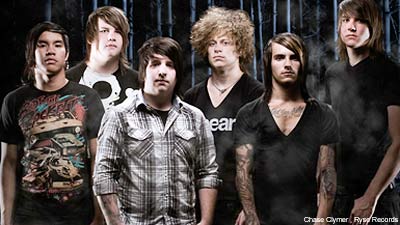 On Oct. 22, Attack Attack! drummer Andrew Wetzel broke his silence about the recent departure of frontman Nick Barham, just days before the crabcore outfit was to embark on a headlining run with I Set My Friends on Fire, Miss May I, Our Last Night and the Color Morale.

In his statement, Wetzel called the split "mutually agreed" upon ... a decision met in a "non-explosive fashion, which we all believe is the best for both sides." The band doesn't intend on replacing Barham with a human being. Instead, they're going electronic.

Keyboardist Caleb Shomo is taking over on vocals, and the band's "music will still be full of Caleb's programming, keys, and all the good things he concocts. It will just be back-tracked live, with the 808 samples and other nonsense on my iPod."

OK then. The statement didn't say much more, and didn't really explain why both sides felt Barham leaving was a stellar idea, but assured the "boys and girls" that the band is "not gonna stop touring, playing shows, and having a generally wonderful time with all of you. See you in your town soon."

Barham, who our pals at MetalSucks called a "Rosie O'Donnell look-a-like," quit the band on Oct. 19. Barham said he "was talking to all the dudes in Attack Attack! and decided that I was going to quit the band. There's no beef between us. It was just time for change. But for right now, I'm going to be going out with my brothers band Sleeping With Sirens, just to keep busy. I will be starting something new soon, so keep an eye out for it."

Filed Under: Attack Attack, AttackAttack, color morale, ColorMorale, i set my friends on fire, ISetMyFriendsOnFire, miss may i, MissMayI, our last night, OurLastNight, sleeping with sirens, SleepingWithSirens
Categories: Interviews
Comments
Leave A Comment
Back To Top