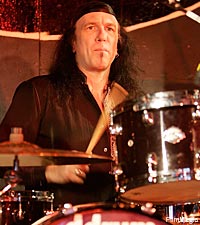 "We've been successful for many years. We've put out 13 albums, we've been touring for 32 years," Anvil drummer Robb Reiner asserts to Noisecreep. "We've got 10s of thousands of die-hard fans around the world, and we've had success all along. Now the mainstream is discovering us, and that's great. The majesty of Anvil has been discovered."

There's no denying Anvil's place in metal history. Even before 'Anvil! The Story of Anvil' became a film sensation, the band was plodding along, quietly influencing some of the biggest names in metal today, including Metallica and Anthrax. But no one in Anvil is bitter -- especially Reiner. In fact, he's proud the mainstream has finally discovered Anvil, and because it's taken so long for true fame to come, the band hasn't had to compromise any of their ideals or passions.

"We're metal, and we're being accepted for exactly what we are -- how we are and not compromising or changing anything. It's who we are. It doesn't get any sweeter than that. It's beautiful," Reiner said.

Even against all odds, Reiner and singer Steve 'Lips' Kudlow -- the constant core of Anvil -- believed their band would succeed. So despite a bigger crowd and more money, not all that much has changed within the Anvil camp, some 30-plus years on. In fact, Reiner still wears a fanny pack regularly, even though the trend died for the rest of us back in the '80s.

"I don't know what [other] people are doing, but we've been wearing those things since forever. It's like a purse," Reiner heartily laughed. "[I keep inside] all kinds of goodies. Like a bag of green," he finished with even more laughter.

The so-called 'Anvil Experience' is available for fans at each American tour stop and includes a meet and greet, CD, DVD and yes, a fanny pack. No word on what is inside each VIP fanny pack.

Anvil will tour America for two more weeks before heading to Australia. The band expects to play live shows through much of 2010.