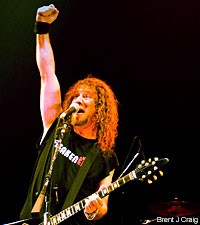 Must-see documentary 'Anvil: The Story of Anvil!' defibrillated the 30-year-long-and-counting career of the downtrodden Canadian metal band Anvil, opening the door for their music to have another chance. The feel-good story of Steve 'Lips' Kudrow, Robb Reiner and Glenn Five struggling to make it long after their supposed sell-by date won the hearts of all who watched -- metal fans or not -- and got the attention of VH1, who have properly released Anvil's inventively titled 13th album 'This is Thirteen,' which is made during the film.

Now that Anvil have the means to convert their film fans into music fans, loveable frontman Lips tells Noisecreep of the feat, "I think it makes it a lot easier in a certain sense. Coming from the other direction is a new thing -- for people to learn about the people that make the music before they know the music, I think there's something quite spectacular about that, and it's great to be part of something like that."

Lips goes on to explain the power of their situation, saying, "ultimately, through musician's music we get to know them, and it usually takes many years. In this particular case, the end result happened before the beginning."

Giving more insight into the anomaly of how "it makes it pretty impossible for people to dislike your music once they know who you are," Lips cites an example from his own experiences. "I can honestly say quite frankly that had I not met Chris Martin before I heard his music, I probably wouldn't listen to it twice. I didn't know [Coldplay's] music, and I was introduced to him as 'Chris' and wasn't told that he was the singer.

"I sat down, and I made friends with this guy only to find out later who he was. So I wonder what his music is like, and he keeps telling me I'm going to hate it. And when I went and listened to it, I went, 'Well, what is there to hate about this -- it seems just as down-to-earth as he was!' Like, it's impossible for me to see it any other way than from his perspective now, because I met him. I really don't know whether I would have disliked Coldplay had I heard them previous to the conversation with Chris, I only know that because of the conversation with Chris I was actually compelled to go seek it out and see what it was."

And though metal is a hard pill to swallow for those stalled by its stereotypes, Lips matter of factly goes on, saying, "I imagine the movie will act in much the same way, and cross genres where it would never have in a million years before, because of the unadulterated pre-judgments that people have towards heavy metal. This breaks down those barriers. Anybody can go see this movie, and all of a sudden they're going, 'You know what? I hate metal music, but I'm gonna buy an Anvil album.'"

In winning over the hearts of those who have seen the film, Lips tells Noisecreep how it has had such a drastic affect on people. "[Once] when I was selling CDs and ran out of CDs, what became really unusual is that people remained in the line and were giving me money and getting nothing for it. And I'm going, 'I can't accept this' ... and people were getting really irate! 'You've got a sister to pay back,' 'You've got a responsibility.' You should see how people take that really personal. It touches people right in their heart, so to me I think it has a lot more power than you would ever get out of just a simple song on the radio."