On March 19, Anthrax will be releasing their long awaited Anthems cover EP.

Oh yeah, Anthrax also thrash up the title track to Thin Lizzy's 1976 Jailbreak album, and Noisecreep has partnered with the band to bring you its exclusive premiere!

"We've been wanting to record 'Jailbreak' for years," said Anthrax drummer Charlie Benante. "Going back to when Joey [Belladonna, singer] was in the band the first time. It was always on our agenda, we just never got around to it. When we started putting together the songs for the EP, we knew it was the right time. We just love this song."

"We've always been big Thin Lizzy fans, and I've said this before, bands like Thin Lizzy and Boston influenced Iron Maiden who then influenced us," Benante continues. "Phil [Lynott, late vocalist/bassist of Thin Lizzy] comes from Ireland and that influenced his music in such a very heavy, rock 'n' roll, poetic way. The thing about 'Jailbreak' is that that great, killer groove, and the lyrics - just great. When we used to tour years ago, we thought of ourselves as this gang, traveling with our entourage, that whole, "tonight there's going to be a jailbreak' Thin Lizzy vibe." 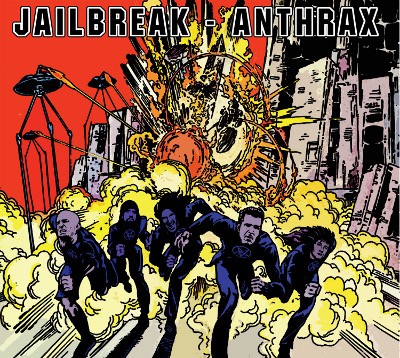 Anthems will hit stores on March 19 and can be pre-ordered at this link.