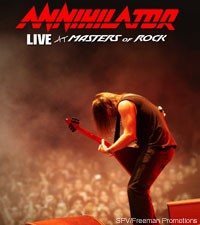 Annihilator have released 13 albums. For this go-round, guitarist Jeff Waters named the album after the band, a convention normally reserved for a first album or a 'definitive' release or to mark a directional sonic shift. There were no such reasons when it came to saddling this release with a name.

"Our singer Dave Padden suggested it," Waters told Noisecreep. "He's been with me for eight years. I couldn't think of a title. It doesn't signify a big change. It is my album and it sounds better since I had no label pressure."

The album is powered by the battery of Padden's lyrics. "Lyrically, he is an angry son of a gun on this record," Waters said. "There is angrier singing, more attitude. He came to the studio and hadn't practiced before flying in but he's really on it. He is angry and pissed. I was like, 'Dude mellow out here.' I wrote songs that weren't angry and he was like, 'Roooar!'"

Waters and Annihilator also just issued 'Live at Masters of Rock,' a live DVD that has must-own status for the Annihilator faithful and for those who like have their faces slashed and thrashed with lots of guitar acrobratics!