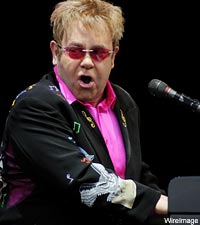 Ask Alice in Chains guitarist Jerry Cantrell the first artist that ever made a big impression on him and he'll rattle off a bunch of names, but one stands out. "I think the particular first spark was definitely Elton John," he tells Noisecreep. In fact, his first album was Elton John's 'Greatest Hits,' a present from his father when he got back from being stationed in Korea. And it now sits in Cantrell's trophy case.

So there is something amazingly special in John playing piano on the title track to Alice in Chains' new 'Black Gives Way to Blue' album, a song Cantrell wrote to say goodbye to his fallen band mate and brother, Layne Staley. "It's one of those really special moments in life where what you do, what started you off, and the fact you're in the process of doing your own thing kind of collide," he says. "Those are really rare moments."

The two met initially in Las Vegas, and Cantrell was amazed by John's musical knowledge. "He was talking to me about System of a Down and he was talking tracks, a crazy array of stuff, and that he keeps up on that stuff was really impressive to me," he says. "He's still a fan, that's f---ing cool because I still am, too."

Cantrell tells Noisecreep that the night it was recorded, "We were crying our eyes out." But he thought writing the song was goning to kill him. "I sent it to [drummer Sean Kinney], and then immediately I started getting these f---ing migraine headaches where I felt like my brain was like unseated in my skull," he recalls. "I went through this mystery illness for about three weeks immediately following that where I really thought I was gonna f---ing die. I was in physical pain to the point of tears, and they couldn't find anything wrong with me."

Now that he looks back on it, Cantrell believes it was the pain of saying goodbye. "I think what it really came down to there was a huge chunk of grief there I'd been holding onto for a long time. I think we all have," he says.

The end result, though, is a song that stands with the greatest of Alice's work. "I'm really, really proud of that song," he says. "I'm proud of it for a lot of reasons. It's all about facing up, owning your s--t, owning your good stuff and your bad stuff, and continuing to walk forward and live a life."

And, as an added bonus, he got a great memento out of the recording. "I pulled out the program from the 'Red Piano' thing, and I'm looking at this page that's got lyrics on it and on the bottom he wrote, 'Jerry, what an honor to play on this beautiful song. Love you, Elton John,'" he says. "Holy s--t, man."