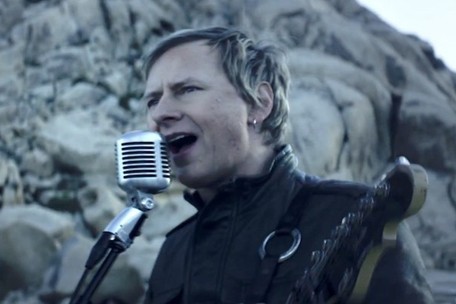 Alice in Chains guitarist Jerry Cantrell stopped by the Electronics Entertainment Expo (E3) on Tuesday (June 11) to give a few music lessons via Ubisoft's new 'Rocksmith 2014' edition. Debuting in October, the new version enables players to plug a guitar and bass into various consoles, including the Xbox 360 and PlayStation 3, as they attempt to reach new rock horizons.

Cantrell started things off with a quick performance of Alice in Chains' signature tune 'Man in the Box.' He then proceeded to connect with Rocksmith and continue to jam out on his guitar with the large screen projecting the game played behind him. During the presentation, he told the audience that interacting with Rocksmith is like "jamming with real musician," and he described the game's session mode as an addicting experience.

'Rocksmith 2014' features over 50 songs, including the Alice in Chains track 'Stone,' 'Don't Look Back In Anger' by Oasis, and 'The Chimera' by Smashing Pumpkins. The Rocksmith franchise, according to a study conducted by the Toluna Group, reported that 95 percent of the players have improved their guitar experience thanks to playing the game. An estimated 1.4 million gamers have learned to play the guitar through past editions of the Rocksmith tutorial.