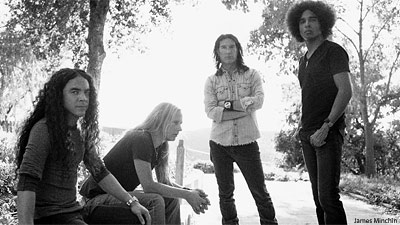 With Alice In Chains' comeback album, 'Black Gives Way to Blue,' in stores now, the video for 'Check My Brain' is a straight-ahead performance clip -- with a twist. A song about guitarist Jerry Cantrell's relocation from Seattle to Los Angeles, it features the band playing against a backdrop of scenes in Los Angeles. Retro-sleazy night streets, a beach with an amusement park in the background, and even a shot of their label's headquarters the Capitol Building, appear in the video.

But the video is highly color-corrected in vivid yet dark colors, giving off a psychedelic appearance to match the song's woozy riff. Amid red and green skies, purple shores and blue trees, the song's color changes match the title of their first album in 14 years. Shot mostly in green screen by director Alex Courtes, the cuts and camera movement in the video reflect the (in the band's words) "seasick" riff that anchors the song. Most importantly, Alice In Chains appear to be having fun shooting the video, something that seemed to be in short supply in the band's previous incarnation. A clip showing the making of the video has been made available, too. 'Black Gives Way to Blue' is expected to sell between 130,000 and 140,000 copies in its first week.