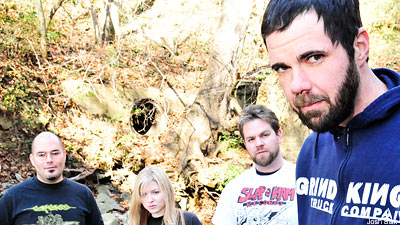 Agoraphobic Nosebleed are known for their spasmodic take on grindcore, but as the band's leader Scott Hull told Noisecreep last month, their upcoming album, 'Agorapocalypse,' was also inspired by crossover thrash greats Corrosion of Conformity. We asked the guitarist what he thought about the current crop of thrash bands that have popped up in the last few years. "The optimist in me thinks it's cool to have a new strain of influence that gets people excited. Unfortunately, it reeks of opportunism," complains Hull.

We obviously struck a nerve because he wasn't done yet. "The strangest thing is most of them don't really sound like the bands I was listening to back then. It all really does seem very fad-ish." His bull*hit radar also detects some questionable fashion choices, "Certainly it's a rehash and it's weird to see some of these bands hamming it up for the camera, flipping the bills of their hats up." In the end, Hull admits the new breed of thrash acts are probably not going away anytime soon, "I don't know but it's hard for me to be tough on bands that are doing what they do well."

Last year Hull oversaw a collection called 'This Comp Kills Fascists' for the folks at Relapse Records, which exclusively featured grind bands. We asked him if it was his way of paying tribute to the compilations that inspired him. "Absolutely, you've hit the nail on the head! Compilations like 'Cry Now, Cry Later,' the 'Reality' comps, 'Accidental Double Homicide' (Satan's Pimp's 7" comps), Earache Records' 'Grindcrusher' comp, 'The North Atlantic Noise Attack,' and 'Apocalyptic Convulsions' are all classics in their genres and they had a huge impact on me." The scrappy artwork for 'This Comp Kills Fascists' also had special meaning to Scott: "I also wanted to have the artwork reflect back to the time when no one had Photoshop. It was all about going into Kinko's with some stolen artwork and copying, cutting, and pasting everything together."

Despite his brutal recording output with Agoraphobic Nosebleed, Pig Destroyer, and his various other projects, Hull is a family man with kids, a mortgage, and a job working with the government. Growing up in a home with a music collection as vast and eclectic as Hull's probably sounds like complete bliss to anyone reading this. Noisecreep had to ask Scott if his kids like blast beats yet. "Well, my one-year-old dances to anything with a drumbeat but my older son hates grind. He hates all of the screaming and is into his mom's club music a lot more. He'll be like my Alex P. Keaton."