Based on all ship-to-shore accounts, The KISS Kruise II (Oct. 31-Nov. 1) was a smash just as it was on its maiden voyage last year. One of the bonuses for KISS fans aboard was an early look at Adler, the new band featuring original Guns N' Roses drummer Steven Adler.

The band's debut album, Back From the Dead, is due out Nov. 26, and while Noisecreep will be covering that, we also wanted to hear how the Kruise went so they as soon as Adler got back into port a few days ago, we reached out to Lonnie Paul to ask him about the adventure.

"The KISS Kruise was amazing," he told Noisecreep. "Everyone from the band and our crew had a blast! KISS and their people were very good to us, and the staff on the ship gave us the total "rock star" treatment. And the response to the band was everything we had hoped for. We were told by the overwhelming majority that they came to see us perform GNR songs, but by the end of the set, they said they couldn't have cared less about GNR." 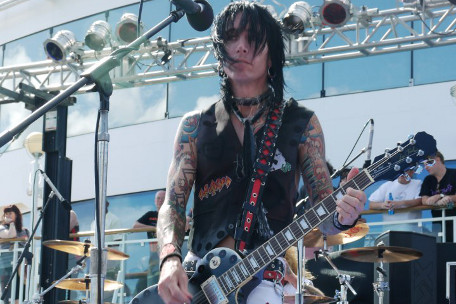 As to whether KISS had a chance to check out Adler, Paul told us that all the members of KISS saw them play at least one of the three performances on the ship.

As for their next move, Paul clued Noisecreep in. "The next step for Adler is more touring, and obviously the official release of the record November 26. Our manager and touring agents are putting things together now for the new year. There is talk of South America, Japan, India and of course here in the States."

Back From The Dead is now available for pre-order at this link and everyone that pre-orders the CD will receive a special bonus track.

Head to Adler's official Facebook page for more info on the new band.