After months of anticipation, today is the day Adler's highly-waited debut album, Back From the Dead, hits the street. Noisecreep first sat down with the band several months ago and was struck at once by the band's unique chemistry; four guys locked in and focused while getting along like brothers. We liked what we heard when they played acoustically for us in a living room, and we're happy to report that the new album doesn't let down.

Back From the Dead is full of life; spiked with the sorts of muscular riffs, hooks and sly lyrics that on the one hand harnesses the power of classic rock eras gone by, but on the other hand is imbued with a no-nonsense modern edge that's fresh, alive and exhilarating – this is just a killer band playing great songs and isn't that what this is all supposed to be about, this rock and roll thing?

There are some nice guest appearances from Slash and John 5, but the album stands on its own from the quality of songs (many co-written by Bunton/Paul) and the powerful performances, which rock, roll, and soar, particularly on the mid-tempo track, "Waterfall," which will have your hoisting your lighter up in the air in about five seconds – a testament to the slam-dunk quality of this album.

Steven Adler's battles with all that the rock 'n' roll lifestyle has thrown at him are well documented. But Back From the Dead puts all of that in the background and sets a new course for he and his band members. It seems Adler has found the ultimate musical support system and together they have forged a union that has produced one of the strongest albums of the year. It is just that good.

Listen to Back From the Dead Here

On the heels of the release, Noisecreep spoke with Steven Adler and Jacob Bunton. 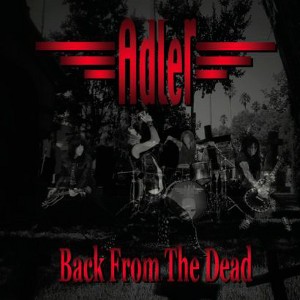 Steven, what does this record mean to you?

Adler: Everything! It's my second chapter. Adler's Appetite was just something I wanted to do because I wasn't done playing those songs. They were a big part of my life and I was so proud of them. Such a crazy part of my life! With Guns, the success happened so fast. Duff [McKagan] will argue with me about this, but it was like 13 shows in and we were pretty big! At the Rock and Roll Hall of Fame, my dream of playing with all those guys together, any hopes of that, just went away. So you move on. And I have moved on with this amazing band.

Jacob's vocals on the record are stellar.

Adler: The one word that comes to mind is superstar. He's such an amazing diamond in the rough. It's funny; all of the guys in the band bring something special. They all play a really big part in Adler. All I can say is, God brought these guy to me. This band is a very special group of guys and I love them dearly.

Watch 'The One That You Hated' Video

What cuts stand out for you?

Adler: "Good to Be Bad" is just amazing to me. The whole band plays it so perfectly, then John 5 came in to add some guitar and it just went over the top. I listen to this album every day. My wife listens to it every day. Not because we have to, but because we want to, we just like it that much. It's so cool to be a part of something you love and appreciate – and this is just the beginning. We've been rehearsing six months straight - we are so tight and so ready to play now. We're a force to be reckoned with and we are anxious to get out and play. We're touring Japan next year with Duff's band. But we are very anxious to hit the road here at home.

You've survived a lot in your life. What do you attribute that survival to?

Adler: I feel blessed every second, and I thank reverend Joel Osteen. I watch him every Sunday, I read his books, he is just so positive, and I'd love to meet him someday and thank him personally.

Jacob, what's your experience in Adler been like up until now?

Bunton: Growing up had my KISS posters up on the wall, and Poison and Motley Crue, but first and foremost I had my Guns N' Roses posters up. To this day, Appetite for Destruction is still my favorite album of all time, it changed my life. I learned how to play guitar through that album and I've been singing the songs forever. Recording this new album, doing the vocals, I 'd look out from the vocal booth and see Slash playing guitar and Steven on the drums and it was just crazy – I never imagined this happening. But as far a the band, what Lonny, Johnny, Steven and me have is an amazing chemistry. Everyone plays such an important part.

And you're happy with the new album?

Bunton: Thrilled. Look, any time you play with a former member of Guns, you're always compared to Guns. I understand that, but people have to understand we are not trying to replicate anything; we are a brand new band with our own sound and songs. People might say, "This isn't like Guns 'N Roses." You're damned right it isn't. This is Adler.

As an added bonus, Noisecreep also asked each Adler member which albums most influenced them growing up:

For Johnny Martin it was Cheap Trick's In Color, the debut KISS record and Revolver by the Beatles.

As for the music that first set Adler on his rock and roll journey? There's just one album.

"One record and one record only. Live Killers by Queen. That was it. I saw Roger Taylor there on the inner sleeve of the album, just how classy and cool he looked, the magic that he made - he was doing things nobody else was doing."

Back From the Dead is out now and available at this link. Listen to the album in its entirety here.

Head to Adler's official Facebook page for more info on the new band.