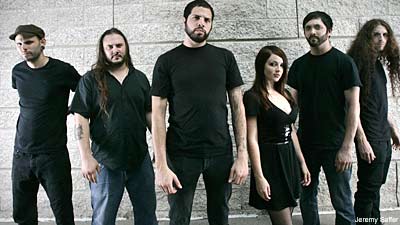 When Disney teen queen Demi Lovato went on national TV, talking about her love for metal, she name checked extreme acts like Job for a Cowboy and Abigail Williams. Most metalheads could have assumed Lovato was talking about the character in 'The Crucible,' from which the band borrows its name -- but she most certainly wasn't!

"Apparently, she was specific," Abigail Williams vocalist/guitarist Ken Sorceron told Noisecreep. "She was on Jimmy Fallon and she said she likes metal or something stupid like that, and he asked her which bands, and she said Job for a Cowboy, Abigail Williams and Maylene and the Sons of Disaster. So a million people told me about it and I was like, 'That is f---ing strange.' I had heard it before on MTV News or something!

"She said the same thing, but instead of Maylene, she said she liked Dimmu Borgir. She may have gotten in trouble for mentioning Dimmu. She said that Dimmu was her favorite live band and they are Satanic as f--- and she works for Disney so they were probably like, 'Are you f---ing nuts?' Little kids will check that out since she said it. I thought it was entertaining. I think part of me thinks it sucks, since I wonder if that's the audience we are reaching? If so, that's a problem. But it's sort of cool. It is hard to decide, really."

Sorceron said he is going to assume that Miss Lovato does enjoy symphonic death metal since she did mention his band -- twice -- and Dimmu. "Maybe she had good taste?" he mused. Metalheads are sure to agree. Throw them horns up, Demi!