On May 21, A Pale Horse Named Death will return with Lay My Soul to Waste, their sophomore album. Noisecreep has the pleasure of bringing you the exclusive premiere of "Killer By Night," a track off the album.

"'Killer By Night' is pretty much the sequel for the song 'Serial Killer' off of the first album," Abrucsato tells Noisecreep. "It's a continuing story of a killer living a double life with multiple personality disorder. It's one of my favorite songs we've ever done."

CLICK HERE IF YOU'RE LISTENING ON A MOBILE DEVICE

Lay My Soul to Waste will arrive in stores on May 21 via Steamhammer/SPV. Pre-order the album here today! 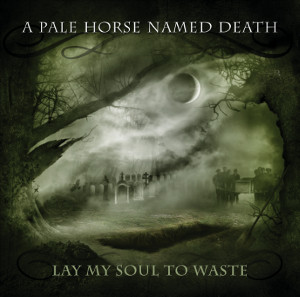 Follow @Noisecreep on Twitter | Like Us on Facebook | Sign Up for Our Newsletter
Filed Under: A Pale Horse Named Death, APaleHorseNamedDeath
Categories: News
Comments
Leave A Comment
Sal Abruscato Still Influenced by ’90s Accomplishments on New A Pale Horse Named Death Album
A Pale Horse Named Death Get Evil on ‘When Crows Descend’ — Song Premiere
Hard Rock and Metal New Releases — June 2011
How Pantera’s Rex Brown Went From Playing Tuba to Picking Up the Bass
Andy Biersack’s New Year’s Resolution Is One We Can All Learn From
Floor Jansen Busts ‘Sick Dance Moves’ After Forgetting Nightwish Lyrics
These Double–Sided Guitars With Two Necks Are Not a Joke
35 Best Rock + Metal Cover Songs of 2022
Godsmack Beat Metallica for No. 1 Song on Billboard Mainstream Rock Chart