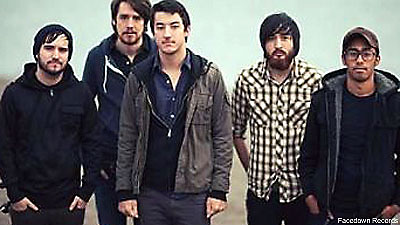 Killer Lyrics: You are all mindless sheep / Just a piece of the machine / Keep fueling your hopeless dreams / They will never mean a thing.

A Hope for Home return with their sophomore effort, 'Realis,' on Facedown Records. The first single, 'The Machine Stops', lyrically, is part of the album's theme of searching for meaning when life appears to not have any at all. "The song was inspired by a science-fiction short story called 'The Machine Stops' written by E.M. Foster in 1909," the band told Noisecreep. "To sum it up, the story talks about the role technology plays in our lives and how mankind's dependency on it could ultimately lead to our downfall."

The band's young career demonstrates a continued interest in literature. Their previous release, 'The Everlasting Man,' was named after a book written by early 20th century journalist and writer G.K. Chesterton. The book was intellectual defense of the Christian church, so it makes sense that the band would try their hand at something more fanciful.

"Conceptually, ['The Machine Stop'] sits at a point in the record where the protagonist, looking at the things around him, begins to reject the idea of being a part of the world," the band explained further. "He starts to see everything as a cold, rigid, hopeless 'machine' where our purpose is to simply work as a means toward some distant end that may never exist. At the end of the song we see him turn and walk away from everything."

The band even adapted parts of the lyrics to the actual music. "The whole second half of the song has a really mechanical, chugging steam engine feel to it, so we wanted to complement some of that sonic imagery with the lyrics."

A Hope for Home will embark on a U.S. tour in March and April to support the release.