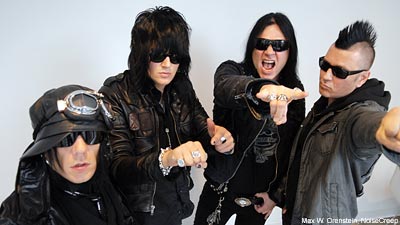 There's no better place for a glammed out, vampire rock band to record an album than in Hollywood. The 69 Eyes parked their hides in the studio with producer Matt Hyde for their latest, 'Back in Blood' -- an album that feels injected with an extra potent dose of rock 'n' roll swagger, something that the Helsinki-based band has always been known for.

"We recreated ourselves, going back to where we started," drummer Jussi 69 told Noisecreep. "We couldn't play back then, but we had energy. Now, we can play and we have that energy back. We were playing it a bit too safe on our last few albums. Don't get me wrong, I love them, but they were polished. For this album, we were all about the Ramones, the Stooges and that rock vibe. We wanted to have that same kind of feel and energy that you find on 'Appetite for Destruction.' Bands can lose that. Guns N' Roses did that album, got huge and their next album was polished, and they lost it and dulled the edge."

Vocalist Jyrki 69 concurred, saying, "You have to update yourself. It is uncomfortable, being away from home when you record, but we were in L.A. and since we're an '80s band that started in 1989, and are of course influenced by the Sunset Strip glam rock scene, going there made us feel that the danger is back. We brought back the danger. Matt Hyde squeezed everything out of us, to make the album aggressive -- in an American way that was in your face, but not sloppy."

The band has traversed the globe while on tour, but they've never recorded anywhere but in their native Finland. So recording out of that comfort zone provided the necessary boost and jolt for 'Back in Blood.' Jussi said, "A totally new experience gave us s---load of energy. Where else do you record a rock album than in Hollywood? It's a cliché, but it's the truth!"

The band admits that Hyde was crucial to the process. "It was his idea to make the record that our fans would love us to do," Jyrki said. "He listened to previous records and said 'Blessed Be,' which came out nine years ago, was our best. It was like he got in the mindset of our fans and got us back to where we came from, which is danger, rock 'n' roll and an unhealthy dose of goth!"

'Back in Blood' is out via the End Records in September.

The 69 Eyes Tour Dates
on TourTracker.com