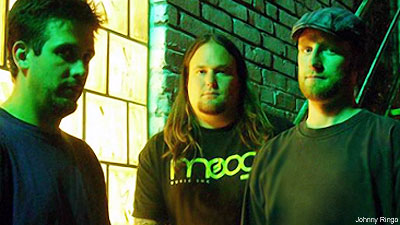 The days of that Cinderella dream of getting signed to a large label with little work and only a few shows under the belt are long gone -- unless of course the band is very pretty -- very pretty -- and someone's dad knows somebody. The name of the game now for any new band is building the fan base.

"We give a lot of CDs out for free and consider them more of a marketing tool or a business card to us than a source of profit," bassist Matt Blanks of the Colorado prog outfit 19A.D.D. told Noisecreep of the band's method of exposure. "We are just happy there are people out there listening to them."

The instrumental trio released their debut full-length 'Dead River,' a sprawling album of progressive goodness one could easily say was 'Red'-era King Crimson infused. Very quickly the self-released album began showing up on torrent sites and music sharing blogs. According to Blanks, the band couldn't be more satisfied with the sharing and even want more people to join in. "A lot of people don't buy music anymore, but it's still equally as important to get the music out into their hands so that when you play in their city they'll come out and see the show, and maybe buy a shirt or sticker. If someone cares enough to rip the disc and upload it, and someone else cares enough to download and listen to it, we consider it a good thing."

It's actions and attitudes like this that led the band to sell more CDs in Europe than in Denver. "I think though, in general," Blanks continued, attemptimg to understand the reason for the over the ocean surge in fans, "people over there are more accepting of metal as well as progressive music ... which would explain the interest we've had without any promotion."

Beginning as more of a free-form noise project, the band consisting of Blanks, Eric Pereira (drums, synth) and Jared Emery (Guitar, saxophone, synth) opted very quickly to abandon the improv sound for a more structured one. "We were a little eager to write some stuff that was more digestible," remarked Blanks. "We definitely wanted to keep the noise element in with the songwriting, but also wanted to put together some songs that would challenge us, as well as the listeners a little more. "

'Dead River' is very much a colliding of assorted sounds, and the album's 18-panel psychedelic drunk artwork that gets unraveled from the jewel case fits the music, but the band's newer songs have two things being experimented with. "Some of the new material we are working on has more of a post-rock vibe to it," says Blanks. "Maybe not as technical and fast as some material on 'Dead River,' but still very complex and rich in composition, just in a slower and more layered melodic approach."

The other is the concept of vocals with each member experimenting in only sparse variations. "I can't guarantee we'll record the new songs with any vocals but we are definitely experimenting with the idea. Our big philosophy with this band is not to put any limits or rules on our songwriting ... anything goes. If we met a vocalist, trombonist and skin flute player that all helped to further progress our sound we'd hire all three of them on the spot -- yet we're perfectly content staying as an instrumental three piece."