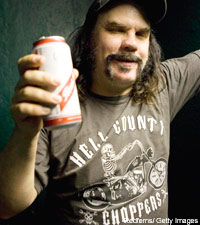 "It's actually funny that we didn't hit any Motörhead," Cartwright tells Noisecreep. "But it's also strange we didn't get any Abba or Bee Gees. But we did get [Jimbo Johnson's] 'Popcorn!'

To our surprise, we discovered that Cartwright is a multidimensional character with a diverse taste in music -- and he even walks on two legs. But maybe we shouldn't have been so befuddled. While Nashville Pussy's songs are motivated by drinking, fighting and, well, having a good time, the band's influences clearly include southern rock, punk, blues and rockabilly. As a result, they're the perfect opening act for the Reverend Horton Heat and Motörhead, both of whom they're on tour with through Oct. 10.

In addition to Jimbo Johnson, Cartwright's iPod shuffle exposed a bunch of classic rock (Creedence Clearwater Revival, Jimmy Page, Free), some rippin' punk (Didjits, Supersuckers) and a bunch of blues, R&B and gospel (Sam and Dave, B.B. King, Muddy Waters, Staple Singers). Aside from ZZ Top's 'Enjoy and Get It On,' none of the songs seem to be about, well, drinking, fighting and sexing it up -- except maybe 'Popcorn.'

Staple Singers -- 'You've Got to Earn It'