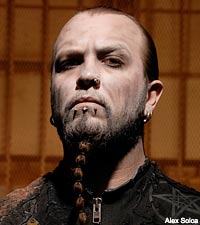 The second participant (i.e. victim) for our new column, 'Your iPod Is Showing,' is Dimmu Borgir guitarist Silenoz. One of the most commercially successful Norwegian black metal bands, Dimmu play pummeling songs suffused with enticing melodies and Wagnerian keyboard swells. As such, we pretty much expected to see Carl Orff's 'Ave Formosissima' on the guitarist's random shuffle list alongside stuff like Primordial's 'Traitors Gate.' And so did Silenoz.

"I'm really surprised that the 20-song shuffle list came out so metal," he tells Noisecreep. "I mean, I had expected some more skeletons in the closet for this experiment as I know there's more hidden treasures in my 11,000-plus-song iPod library, but I think this still shows some of the variety, diversity and open-mindedness that I have developed over the years when it comes to my taste in music."

Some of the more eclectic songs to pop up on Silenoz's list include Buena Vista Social Club's 'El Cuarto de Tula,' ZZ Top's 'Whisky 'n Mama' and a DJ remix of the Doors. But those are hardly the most embarrassing cuts. We'll excuse him for Faithless' 'Don't Leave Me' since the British electronica group are pretty experimental and kinda cool. But we can't turn the other cheek to Sixx:AM's cheesy 'Life After Death.'

It would be bad enough for a black metal dude to have something by Mötley Crüe, let alone the soundtrack album Crue bassist Nikki Sixx did for his book, 'The Heroin Diaries.' Also, while we'll never complain about the inclusion of Black Sabbath on a list, the track 'Headless Cross' is from the band's 1989 album of the same name, and we don't even know anyone who still owns that one -- so we don't really consider it Black Sabbath. After all, isn't anything the band did between 1983's 'Born Again' and 1992's 'Dehumanizer' basically irrelevant? Send hate mail to the usual address.

As for other stuff, we give a hearty thumbs up to Silenoz having Coroner's 'Shadow of a Dream' on his iPod. The Swiss tech-thrash group was one of the most unappreciated outfits in the U.S. of the late '80s and early '90s, yet they paved the way for acclaimed groups like Atheist and Necrophagist. And we're stoked someone from Norway knows who Agent Steel are. The Los Angeles speed metal band released a pair of albums with space alien singer John Cyriis -- 1985's 'Skeptics Apocalypse' and 1987's 'Unstoppable Force' -- before he bolted for other planets. They remain Agent Steel's best offerings to date. We're also pleased Silenoz has gore metal supergroup the Ravenous on his list, and not only because the song 'Nightmare in a Damaged Brain' is about a warped 1981 splatter movie by Romano Scavolini.

Okay, time to check out Silenoz's complete list below:

14. Destruction - 'Deposition (Your Heads Will Roll'

17. Ravenous - 'Nightmare in A Damaged Brain'