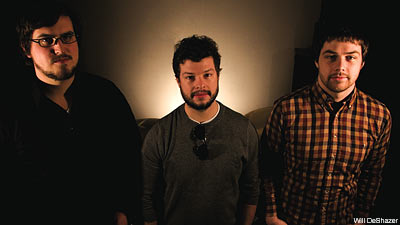 Currently Young Widows are out on the road supporting Russian Circles. If you're lucky enough to see these fine Louisville, Ky. fellows on their current jaunt, be prepared to hear a good chunk of new material. "These songs are all over the place," vocalist/guitarist Evan Patterson tells Noisecreep of the tracks being planned for their follow up to 'Old Wounds.' "One song is a great f---ing punk song, and the next is the most detached s--- I've ever written."

Newer songs jumping all over the place makes sense for the band. Part of the Young Widows' sound has always been to not cover old ground. "It's about not writing a record were all the songs sound the same," Patterson says. "Obviously, it's always going to sound like our band. We want to get more dynamic and test the darker side of our band, as well as the faster, more punk side." He breathed out in confidence, a pride over what will be the band's third release. "We're getting to the point, whether it's good or bad to some people, that's it's our own thing. It's not 'this sounds like Unsane' or 'this sounds like Jesus Lizard' thing.

'Old Wounds,' released in 2008, was an experiment in recording taken from sessions under the board of Kurt Ballou at God City Studios and live recordings from a tour that lead the band up to the Massachusetts studio where the stage and stage recordings got layered together to create a grit and aggression. The band has no plans to do that type of recording again. "Kind of feel like 'been there, done that' really. We want to do a more relaxed studio environment this time," Patterson confessed. Though the record's results were what the band wanted -- capturing the live sound -- they don't look back in a fondness of the perilous time spent on the tracks. "Mixing live stuff and the studio was really stressful," says Patterson. Bassist Nick Thieneman adds, "It was a lot of work in a really short amount of time and I wouldn't want to do that again."

But what really created the stress was always being around the studio, never getting a chance to be separated from the album -- or the band -- which is why they plan to record back in Kentucky this time around. "We want to stay at home so we can just work and go home and get a way from recording for a while and then step back into it with fresh ears and fresh minds," says Patterson. "When you're there, you get burnt out so quickly."

The fact that these newer songs show a darker side of the band might be very fitting with their choice for a studio: The Funeral Home, a studio that is run right above a funeral home by former Elliott and current Wax Fang drummer Kevin Ratterman. "The drum tracking is in the viewing area, so there will be a casket standing behind us," Thieneman comments. For both members, this will not be their first time to record at the hometown studio, both have tracked there with previous bands.

"I kind of like it. It's very relaxed," Patterson smiles. "It's a captive audience," Thieneman jokes. "I think when we get in there we're not even thinking about where we are at that point." Patterson adds, on what could be considered an awkward and off-putting environment to record in.

And though the band is forgoing the use of concert recordings for this record, the goal to always make the records sound like the shows should be expected to continue -- this will just be the next step in capturing it. "'Old Wounds' was a big step in being a band that's not in a genre," Patterson says. "You can't just nail us down to anything."