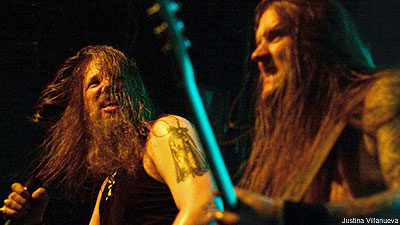 "It doesn't matter if you don't know the lyrics, it's death metal!" yelles Amon Amarth frontman Johan Hegg as he tried to reason with the crowd.

Yet, I don't think the Swedish death metaller realized that: everyone did know the lyrics to 'Pursuit of Vikings' -- which was the last song the band played at Irving Plaza on April 25. From wall to wall, people screamed the lyrics to the Viking metal anthem. As loud as the voices screaming the song was as thunderous as the vibrations beneath our feet. People were jumping up and down that hard. 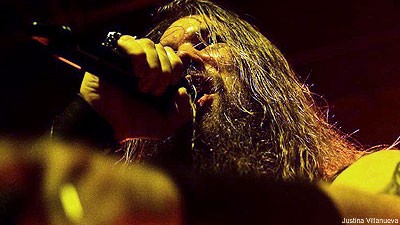 I was surprised that Hegg walked on stage without his Viking flask -- better known as a drinking horn. But I was not surprised by the vocalist's fascination with the New York female population (it seems to be the topic of discussion for many metal bands).

"It's a pleasure to see so many lovely women in New York," Hegg said to the crowd. He then asked the women in the room to scream, which was followed by a wave of "whoo!"

The sold out New York show was one of the last left of tour dates in support of 2008's 'Twilight of the Thunder God' -- which means, yes, the band has been touring one album for over two years.

This summer they will be an array of European metal festivals, including Sonisphere Switzerland.