Late last year, it was announced that the iconic, Grammy-winning band Yes would hit the road to present three of their classic albums in their entirety. Yes, after many lineup changes over the years, is now comprised of guitarist Steve Howe, keyboardist Geoff Downes, drummer Alan White, bassist Chris Squire and newcomer vocalist Jon Davison. They would be performing Close to the Edge, Going For The One and The Yes Album. The tour would mark the very first time the band had performed an album in its entirety since 1973.

Last night (March 6), at the tour's fourth stop, in downtown Los Angeles at the historic Orpheum Theatre, Yes demonstrated why they remain one of the most vaunted and respected musical forces in progressive rock among both fans and players alike. The Rock and Roll Hall of Fame may not feel a need to acknowledge this seminal group, but judging from the emotion and positive energy from the sold-out house, the legions of Yes lovers don't care about awards and stuffy critic accolades. What they do care about is soaring, intricate, timeless music that transports the listener into another time and space.

As the lights dimmed and the strains of "The Firebird Suite" filled the theater just after 8 p.m., the band members stepped into place and the journey began with a full reading of 1972's Close to the Edge. The last album to feature original drummer Bill Bruford, the title track of the record was inspired by Hermann Hess's book, Siddhartha.

Singer Jon Davison, now a year into his role as front man (he replaced Benoit David) demonstrated from the outset that he is more than up to the task. Evoking the pitch and range of original singer Jon Anderson, Davison, who once spent time in a Yes tribute band, seemed comfortable, earnest and a little in awe of the music himself (his childhood pal, Foo Fighters drummer Taylor Hawkins, was also in the house).

After Close to the Edge, it was time for 1977's Going for the One, notable back then for featuring shorter, punchier songs as opposed to the sprawling epics that by then had come to define their approach. The album provided a nice counterpoint to the weightier Edge, and culminated with a confetti blizzard that turned the vintage theater into a spacey, winter wonderland.

After a brief intermission, Yes closed out the night with 1970's The Yes Album, the band's third effort and the first to feature guitarist Steve Howe (who remains a compelling, professorial focal part of the Yes life experience). This was perhaps where the band found its most effervescent groove, opening with "Yours Is No Disgrace," then featuring Howe's nimble-fingered acoustic vamping on "Clap" before rolling through one of the band's most beloved signatures, "I've Seen All Good People." The well-oiled rhythm section of drummer Alan White and bassist Chris Squire provided many subtle flourishes, as did keyboardist Geoff Downes.

The encore was the swirling and knotty FM radio staple, "Roundabout."

Blending elements of jazz, classical, blues, funk, country and more, Yes reminded one that "prog" music as it is become known, is not merely about bone jarring time changes and lightning fast playing proficiency. At one time it was about exploration, experimentation and an elegant, seamless blending of many musical styles into one space-age storm that remains inspired, atmospheric and very hard to categorize.

This was a feast for the followers; faithful renditions for the many die hard starship troopers that were no doubt reliving many scrapbook Yes memories over the years. But the show was not about mere nostalgia. This is a band that still feels strangely new, simply by doing what they do, pushing the boundaries and presenting songs that, like the wildly colorful and original Roger Dean artwork that represents them, are just beautifully designed and built to last. 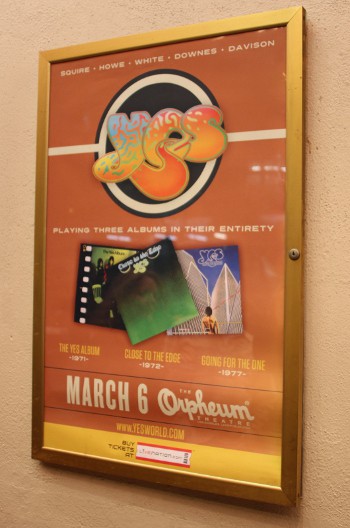 03/16 Hammond, IN The Venue at Horseshoe Casino