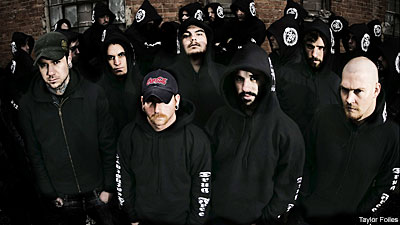 xDEATHSTARx will play their final show at April's Facedown Fest in Pomona, California. The California band, known for its outwardly Christian beliefs, its straight edge stance and for its ability to have all members handle the vocals like the WuTang Clan of metalcore, is parting ways, simply because the members have too much else going on to fully commit to xDEATHSTARx's existence.

Singer Eric Gregson told Noisecreep, "The band has slowed down over the last year and my brother Ryan and I heading into new ventures." The new ventures include the new Sleeping Giant record; Gregson is that band's guitarist and is also producing the album.

His brother, however, is training for a triathalon. Said Gregson, "Between me working on Sleeping Giant and my brother training to be an athlete, xDEATHSTARx has taken to the sidelines. We would like to end the band on a good note and we believe Facedown Fest would be the best way to do that."

Filed Under: XDEATHSTARX
Categories: News
Comments
Leave A Comment
Back To Top