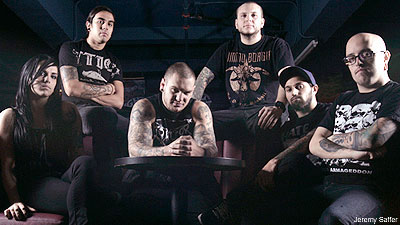 Winds of Plague give new meaning to the term Herculean touring schedule. The band is back on the road, putting miles on the odometer alongside Fear Factory, Dirge Within and Periphery. The band will also enjoy a slot on the Rockstar Energy Drink Mayhem Festival all summer long, as well.

"We are on our third day of the 'Fear Campaign' tour with Fear Factory and so far, all the shows have been awesome," vocalist Johnny Plague told Noisecreep. "It's a great honor to be invited onto their comeback tour, and they put on a hell of a show every night!"

There's certainly no time off for the Orange County, Calif. band, who played nearly 300 shows last year. "We played 261 shows in 2009 and hope to play even more in 2010, so no rest for the wicked," the vocalist said. New keyboardist Alana Potocnik, who replaced Kristen Randall, is assimilating into her role well, too, thanks to her nerdy nature, with Johnny saying, "Alana is an amazing fit for our band, not only as a musician, but she's just as dorky -- if not more dorky -- than us. So yeah, it's all working out beautifully."

You can also watch a video interview with Johnny where he talks touring and Alana.