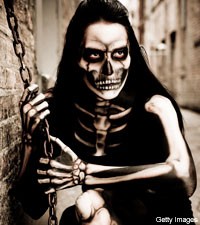 Thank you, Jenny (not photographed at left), for providing this weeks Ask The 'Creep - Who was the first band to wear corpse paint?

We could enter into a long, convoluted discussion of face painting in the theater, German Expressionist cinema, monster movies, and blah, blah, blah, but the short answer is "Alice Cooper." Sure, there were progenitors, and KISS was more famous, but Cooper's look most closely resembles what we think of as corpse paint today: White face? Check. Black eyes? Check. Creepy persona? Check.

As far as bringing the look into Scandinavian black metal, the credit there goes to King Diamond of Danish thrash-metal pioneers Mercyful Fate, whose ghoulish theatrics date to around 1980. Diamond was followed closely by Swiss death-metallers Hellhammer and the Brazilian black metal band Sarcófago (who are often credited as the first band to wear "true" modern-day corpse paint).