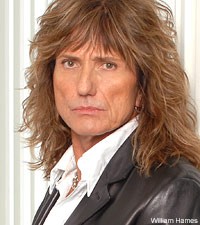 Whitesnake, the '80s arena rock band that have sold more than 100 million albums since 1977, are back on the road all summer with their "old mates" Judas Priest, as special guests on their 'British Steel' 30th anniversary tour.

"We came up on the 'new wave of British heavy metal,'" says frontman David Coverdale. "It was an expression coined by a friend of mine [Geoff Barton] who was an editor of a music paper called Sounds. I'd left Deep Purple and was putting Whitesnake together, so I got caught up with that. There was Iron Maiden, Def Leppard, and (Judas) Priest in there.

"We've maintained a very good friendship," Coverdale says of Priest. "We worked together in South America in 2005, [and] had such a positive connection -- not only with each other but with the audience -- that we've actively been searching for another opportunity to have that because even our crews got on well together."

Coverdale, a married father with a 12-year-old son and 30-year-old daughter who has "blessed him" with two granddaughters, still enjoys touring.

"Otherwise I wouldn't do it," he states. "This is all a matter of choice for me. I absolutely love it. I work maybe six months out of the year. Probably four of that is touring, and I adore it. I have my wife and my son's support and it's kind of fun out there, but the most important thing I've learned in these last 15 years is to have balance in my life. And this is my actual favorite part of the music business, the performing."

Whitesnake have just reissued deluxe CD/DVD versions of 'Slide It In' to mark their 25th anniversary, and 'Slip of the Tongue' to commemorate their 20th on Universal in North America. They hope to make their latest album, 2008's 'Good To Be Bad,' available on iTunes since their European record label, SPV GmbH, declared bankruptcy -- "a sign of the times," says Coverdale.

Still, nothing beats a live concert. Before coming over to this side of the Atlantic, the band wrapped up a European/UK tour with an appearance at the massive Download Festival in Donington Park, England, in front of 80,000 people.

"It's an astonishing, primitive, communal experience to be there with a bunch of people. It's like this vast choir. It's an incredible high," says Coverdale. "You can watch as many YouTube videos of it as possible, nothing will actually beat being there, the living experience. My wife and I, years ago, decided with all the video cameras laying around that we were actually missing the original experience by looking through a view finder. So we backed off doing that and trusted our memories of moments."