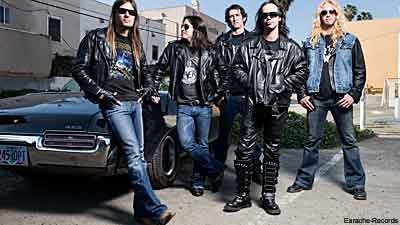 You've got to hand it to White Wizzard bassist Jon Leon for staying true to his vision. Longing to bring metal back to its pre-'90s glory days of headbanging songs and good times, he formed White Wizzard in 2007 and quickly went into the studio to record a batch of songs. The result was the deeply infectious 'High Speed GTO' mini-album. But since then, things have drastically changed for White Wizzard. With the exception of Jon, they're an entirely new band.

Jon explained to Noisecreep, "As the band went on the road and the vision materialized, it was soon obvious that the other members wanted to do heavier music and that the work ethic and personal dynamics were not what I needed to see this through and have it succeed. Everyone had a lot of talent in that lineup but we were not on the same page in the end. It took Steve Harris 20 guys or so to get his lineup right in Iron Maiden, so sometimes if you believe in a vision you have to see it through, and sometimes you have to move on for it to grow or have a true chance to succeed. With that, I feel the new lineup is more what I had in mind and that the band is on a much higher plane now."

So it begs to be asked if he still stands behind 'High Speed GTO,' now that it's finally being released worldwide. "Yes, I stand behind it. It is still writing I am proud of and the sound of White Wizzard, just with a different singer that brought a different element and style to the band. I think we recorded a special bunch of songs. Unfortunately, we all had to go separate ways."

While their full-length album featuring the new lineup is not due until early 2010, Jon doesn't expect to stray too far from their old school metal origins – though there might be some changes. "The sound is much more melodic and vocally way more dynamic. The last singer had a more Joe Elliott meets Diamond Head/Angel Witch thing going on, very NWOBHM, so for the first release and timing it was right," said Jon. "My singer now is the real deal, in the footsteps of Halford, Dio, Tate, etc., so we have taken a huge leap forward. I have also refined my writing, and I think musically it has gotten much more strong. The band is firing on all cylinders now and the full-length is really gonna be something much more powerful."

Regardless of who played on what records, Jon and White Wizzard seem intent on creating the kind of metal that reigned supreme in the '70s and '80s, which is not to say that the metal of the '90s went unnoticed. "I like some '90s metal albums and bands a lot ... Coroner's 'Mental Vortex,' Sepultura's 'Chaos AD,' Pantera's 'Vulgar Display' and 'Far Beyond Driven' – thank them for keeping metal alive during the shitstorm. Opeth, early Entombed, Carcass' 'Heartwork' rules. Early Tool is great. I just hate the copycat bands. It seemed that for every cool band in nu metal there were so many crappy spin-offs.

"That is the '90s legacy for me. I know that happens in every era, but for some reason the spin-offs in the '90s were extra s---. Just a couple of good bands and a lot of s--- trying to all be those couple bands. I mean, how many Layne Staley copycat singers popped up that all sucked? He was, wow, so good. Love that first Alice in Chains album. Great songwriting and melody. Vocals are stunning ... all those s--- singers ruined his legacy. He was great ... but the '90s were not the same as '70s and '80s for metal, not for me anyway."