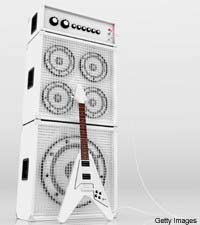 It's going to be quite a day for some of us here at Noisecreep. We're going bicoastal today, with some of us jetting out to California for the kickoff of this summer's RockStar Mayhem Tour, and others of us hanging here in New York to catch the 10 for $10 Tour. Either way, we're all glad its Friday, and that we've got two days to unwind after what has been a rather productive week. This morning's White Noise has a follow-up on the week's biggest story, rumblings of a tour we wouldn't miss for the birth of our own kids, and an update on Linkin Park frontman Chester Bennington's new side project.

+ Sometimes, its just better to keep your mouth shut and let a story die off slowly. Or, you can dig yourself in even deeper, like Malevolent Creation guitarist Phil Fasciana has been doing all week. By now, you've heard Fasciana's claims that, over the weekend, he walked in on some homeless crackhead robbing a convenience store in Florida, was shot at a bunch of time, somehow wrestled the robber to the ground, and popped two caps in his cranium. Well, police in the area of the alleged incident say it never happened, and that Fasciana is lying. Now, Fasciana has fired back.

"Concerning this idiotic debate over my involvement in an attempted robbery and shootout, I wish everyone would believe it is not true and leave me the f--k alone," he writes in a letter to Blabbermouth. "For all the retards who hide behind a computer all day at mommy's house and talk s--t about rumors on Blabbermouth and other heavy metal-related websites, you need to get a life! Get out of the house and maybe someone will try robbing and shooting you one day! Then I would like to hear your reaction! This is the second incident I have been involved with that resulted in someone dying in South Florida and I'm glad they both were not glorified in the news and press."

Fasciana recounted several past incidents, involving family and friends, that never made the news, reasoning that it's not unusual for such happenings to go unreported. "This whole incident is as dead to me as the fool who tried killing me! Some of you people need to get a real life. When something horrible or tragic happens to someone or someone's family that can create problems and drama, most people would like to keep that news out of [the] press, just like me. Because of retards that have nothing better to do than spread rumors and news, it's too late for me to have my family not know about what happened to me and has caused even more problems for me and my family. Believe what you want! I'm going to band practice! I have a life!"

+ Opeth and Tool on the same tour? According to frontman Mikael Åkerfeldt, it almost happened. In an update posted to the band's MySpace page, the singer says "we'd been offered a support tour in the U.S. by Tool but we didn't get it this time. Hopefully. in the future, it might work out." Yes. Let's all hope that comes to pass.

+ Former Guns N' Roses guitarist Slash has updated his Twitter account with some unexpected news. Original GN'R drummer Steven Adler "is going to play on a track for my solo record next week." He also claims that he "plays guitar on the theme song for (the new movie) Bruno," and that fans should wait until after the film's credits to catch "a cameo of me, Snoop Dogg, Sting, [Coldplay's] Chris Martin and [U2's] Bono."

+ Kiss bassist Gene Simmons has been offering up informational tidbits here and there about the band's forthcoming album, which may be a Wal-Mart exclusive when its released this fall. In a recent interview, Simmons offered up the names of three songs: 'Russian Roulette,' 'Modern Day Delilah,' and 'Stand.' We're hoping that the latter isn't an R.E.M. cover.

+ You may not have heard, but Linkin Park's Chester Bennington has a side project called Dead By Sunrise, and they've just finished putting the finishing touches on their debut LP, 'Out of Ashes.' The disc is scheduled for release this fall.

+ Baroness have also completed tracking their second full-length album. The follow-up to 2007's 'Red Album' was recorded in Dallas, and will be in stores this October.