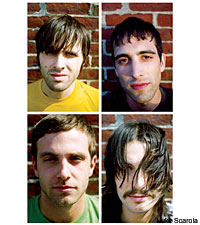 Another week is in the books, and we've finally made it to May. Last week was a busy one for us at Noisecreep, so this weekend, we're going to do nothing but stay inside, avoid the crummy weather, and rock out to the new Suffocation, Devin Townsend, and Swashbuckle LPs... and maybe catch "Wolverine," if the skies clear at all, because of all the comic book super heroes, Wolverine is by far the most metal. He looks like Glenn Danzig, and dude's body literally is infused with solid metal. Wonder what it would look like if Logan were to throw the old horns?

We'd love it if you checked out some of the fine work we've been doing here at Noisecreep, and we've even made it easy for you. The following is a list of links to some of the killer content we've been churning out for you. See you back here Monday morning.

+ Perhaps the biggest news of the week came on Thursday, when Boston's Cave In announced that the hiatus was over, and that new material was on the way. The band's booked one reunion gig for July 19 in Allston, Massachusetts, but you know how these things go... if they get a decent response from that one show, more dates are inevitable. And when we get 'em, we'll be bringing them to you on Noisecreep.

+ Voivod drummer Away talked to us about the band's forthcoming album "Infini," and how it will be Voivod's last collection of material to feature the contributions of late guitarist Denis "Piggy" D'Amour, who passed away in 2005 from cancer. Away also broke down the complicated process that went into getting "Infini" down on tape.

+ After bringing you news on Black Dahlia Murder's selection of Jason Suecof to produce their next, as-yet-untitled LP, we brought you details on the band's first DVD, "Majesty."

+ We caught up with former Mr. Big and David Lee Roth bassist Billy Sheehan, and he told us all about his new album, "Holy Cow!" The set features contributions from former Army of Anyone drummer Ray Luzier and ZZ Top ax man Billy Gibbons. He recounts the day he worked with Gibbons as one of the "greatest things" to ever happen to him during his music career, and recalls "flying for days. It was a miracle, I couldn't be happier."

+ The Devil Wears Prada stopped by the office, and we played video games, discussed the good old days of hair metal, and got some free legal advice to boot.

+ Isis drummer Aaron Harris discussed Tool guitarist Adam Jones' contributions to the band's upcoming album, "Waving Radiant," clearing up all that internet speculation about where we'd hear Jones on the LP. "He just did some guitar and its not gonna be that recognizable, its not your typical guitar sounds," Harris says. Curious? Read on.

+ We also got up close and personal with Steel Panther captain Michael Starr, destroyed our hearing with Sunn 0))), found out why Jonathan Davis has yet to hear the new Korn album, looked back on Shadows Fall's career, and learned that Brooklyn's Tombs would be joining Isis and Pelican on the road.