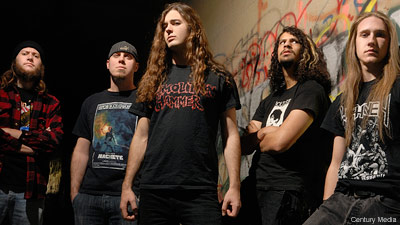 What do you do when one of your fans passes out while partying with after a show...a fan who'd traveled all the way from San Diego to support your band in Mexico the next night? Well, if you're Warbringer's John Kevill, you don't leave that fan on the streets, you load his blacked-out ass into your van, and get back out there on the road.

Warbringer, who will be spending much of this summer overseas, playing massive festival shows with the likes of Arch Enemy, Napalm Death, Sepultura, and the almighty Carcass before heading out September 3 on a U.S. tour alongside Obituary, Goatwhore, Krisiun, and The Berzerker, value their fans, and, as a band with only two records out, really can't afford to lose any fans. So, when some dude from Finland got blitzed on their watch, they did the only sensible thing they could: They helped a brother out.

"We had played in San Diego the night and this guy from Finland, who was in the area, came to our show, and he told us, 'I'll see you guys tomorrow in Mexicali,' and he actually did show up the next day," recalls Kevill. "We were all drinking after the show, and this guy, being a Fin, just got completely blasted drunk. He passed out. We didn't think we should just leave him out there in the street, so we put him in our van."

The band started making its way to Sacramento, Calif., the next stop on their tour, and as they started pulling up to a border crossing, the Fin came to.

"There were two cars in front of us, separating us and the border, and he starts making this noise like he's going to vomit," Warbringer's frontman explains. "So, we're like, 'Open the f---ing door and get him the f--- out of here.' So, when he goes out, he kind of falls out of the van, and smacks his head on this iron fence."

The stumbling Fin started bleeding profusely, and his mishap with the fence attracted the attention of several border guards, who came storming up to the band's van. Long story short, Warbringer were held up for several hours, trying to convince the border guards they weren't kidnappers.

"Eventually, we dropped him off at a hospital in the United States," Kevill says, adding that the Fin suffered a minor concussion and needed several stitches to close the bleeding gash in his head. "He's gotten in touch with us since, and told us he had a killer time."