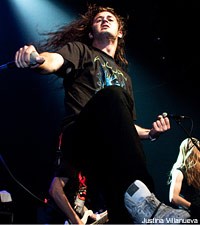 Warbringer have tour dates from now until the end of January, and a couple of dates in Japan already set up for May. This year they've been on opening slots on tours with Obituary and Megadeth. To say that Warbringer is on the road a lot is an understatement. The thrash revivalists don't want to give themselves a break.

"I got an idea. How about we do some 'Total F---ing WAR!'" frontman John Kevill said Nov. 7 at Gramercy Theater.

It seemed like everyone in the front row knew the lyrics and screamed them like they wrote them. Of the other five bands that played that night (Rose Funeral, Augury, the Amenta, Decrepit Birth and Vader), Warbringer had the most attention with crowd-surfers and dynamic headbangers who joined arm in arm in the middle of the mosh pit.

"This next one is about being eaten alive by f---ing sharks!" Kevill delivered a short introduction for every song. For one song, he jumped over the barricade and joined the fans who kept reaching for his mic.

Warbringer's latest release, 'Waking into Nightmares,' is out now on Century Media.