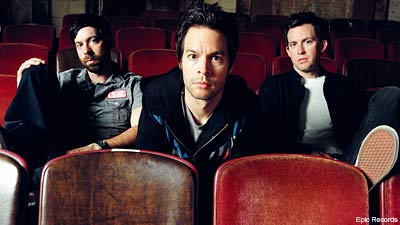 The next few months are going to be hectic for Chevelle. Between now and Aug. 31, the Chicago rockers will be on the road with Staind. Then on Sept. 1, the band will issue 'Sci-Fi Crimes,' the follow-up to 2007's 'Vena Sera.' After that, the band plans to hit the road with Halestorm for a headlining U.S. trek that's supposed to conclude sometime in late October. So if Chevelle end up coming to your neck of the woods, and you want to meet the guys, then head to the local mall.

"It's almost embarrassing to say, but on our days off, that's where we go," admits drummer Sam Loeffler. "It's because we always need clothes or shoes ... something's always destroyed. We're always needing phone parts, DVDs, stuff for our computers ... and everything is at the mall. You only have to take one cab from the hotel, which makes sense. But then you end up hanging out at the mall, and it sucks. It sucks in a huge way."

The Chevelle dudes are also avid longboarders. Before each show, Loeffler says that the dudes cut loose and let off some steam, going on a cruise to get away from the venue. So, if you're ever on your way to a Chevelle show and see three dudes speeding down the road on longboards, chances are you're watching the band taking a break from their rock 'n' roll lives.

While not known for tackling covers on the road, Chevelle have belted out a few on occasion. "We've done some weird stuff live," he says. "Like Sinead O'Connor, the Cure, Depeche Mode. Then we've done stuff that was more expected, like Smashing Pumpkins. It's fun to do Chicago bands, and covers are fun. They're more for us, though. We were talking the other day, about doing a cover on the next album of a CKY song, but that's only because they said they hate us. So we thought that would be cool to do."

In fact, many bands have come out and slammed Chevelle in the past. And over the years, the band has met a lot of unexpected fans, who don't publicly proclaim their fandom.

"We have random people come up to us, like, I remember doing Ozzfest in 2003, and bands you would never expect told us they liked our last record," Loeffler says. "They're always like, 'My girlfriend got me into this, but don't tell the guys in my band because they'll make fun of me.' On one hand, that's cool, but on the other hand, its like, 'Why would they make fun of you?'"