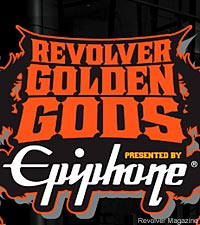 If you didn't vote in the last presidential election, don't fret. Now is your chance to stand up and be heard by casting your votes for the nine categories of the second annual Revolver Golden Gods Awards.The ceremony will be held April 8 at Club Nokia in Los Angeles, where winners will be revealed live on stage, with a broadcast on VH1 Classic on May 22.

The categories are Best Guitarist, Best Drummer, Best Vocalist, Album of the Year, Best Live Band, Best Underground Band, Most Metal Athlete, Hottest Chick(s) in Metal and Don't Call it a Comeback and the nominees are as varied as Megadeth, Tom Morello, Eyes Set to Kill, AC/DC, Lizzy Hale, Dave Grohl and Anvil.

Be sure to vote for your favorite singers, axe slingers and skinsmen and to quote Hatebreed, have your voice be heard. As an added incentive, anyone who casts a vote will be automatically entered into a drawing for a chance to win one of three Harley Davidson prize packs, which include things like a Rider's Edge Course, a free three-day rental of a Harley and a $100 Harley-Davidson gift card.