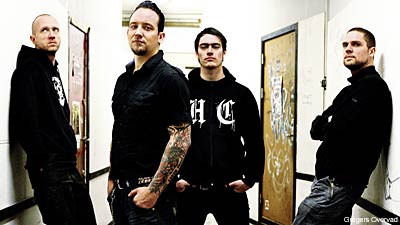 Even though Volbeat's 'Guitar Gangsters and Cadillac Blood' features seven songs that create a single story, lead singer Michael Poulsen said the album is absolutely not a concept record.

"No, no, no," Poulsen told Noisecreep. "I definitely don't like to call it a concept album. The record is not supposed to be about a concept. There's 14 songs on the record, I think it's only seven songs which are combined to make the story. Volbeat's not a concept band. We're a band with lots of different styles and stories. It's definitely not a concept album."

'Guitar Gangster and Cadillac Blood,' Volbeat's third album on Mascot Records, tells the story of a shooting that occurs in the western United States.

"It's a small story about a guy who wakes up in the desert with shooting holes in his body," Poulsen said via telephone from his Copenhagen, Denmark, home. "He's laying in his Cadillac. He's bleeding. When the law enforcement comes, the car and the guy are gone. He's going to this city that you can't find on any map or anything. The whole idea for this guy, Cadillac Blood, is he believes he can find his killer in that city. He performs as a musician and every night he stands on stage, he's looking at the people in the bar trying to figure out who's the killer. That's the story going on on that album."

But the entire album isn't dedicated to the story. It also features a Social Distortion-inspired cover of Kitty Wells' 'Making Believe' and a version of the Hank Williams song 'I'm So Lonesome, I Could Cry.'

Volbeat, which will open for Metallica on their North American tour starting Oct. 26, blends rockabilly with metal, calling Social Distortion a big influence.

"I've been a big fan of Social Distortion for many years," Poulsen said. "I even have the Social D name tattooed on my arm. When we did 'Making Believe,' even though I knew it was a Kitty Wells song, we were really inspired by the version Social Distortion did. Mike Ness is an amazing songwriter. It's amazing to see every time he releases a new record, he just become stronger. We had the opportunity to talk to Mike Ness when we were playing the same festival in Denmark. It's always great to meet people and tell them how important they are for their own material. He's a legend."

Volbeat is currently writing new material for a forthcoming album due out in fall 2010. "We're in the rehearsal room two times a week or something," Poulsen said. "I'm writing material every day. I'm sitting on my couch with my dog. He's helping me out a little bit. Right now we have about 12 new songs. But I always like to write material, maybe around 20 songs. The whole idea is going in the studio in April and releasing new album in September, October.

"We're actually going to the studio in a couple weeks to record one song for our Danish boxing champion, Mikkel Kessler. He's actually in the U.S. right now to promote himself. He's going in a boxing tournament where he has his first fight in the U.S. in November. We're recording a song for that guy. That song he's going to walk in to the ring to. That song we're gonna put out on the Internet so people can download it."

The song, Poulsen said, does not have a title yet, because the lyrics have yet to be written. But he said he will be fully prepared by the time he walks in the studio.