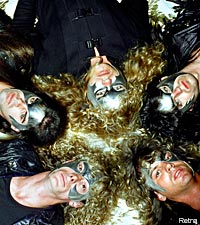 On Wednesday, June 8, former Crimson Glory vocalist John Patrick Jr. McDonald passed away from "total kidney and live failure." The 47 year old singer was better known to metal fans as Midnight (pictured on the top in the middle). In the 80s Crimson Glory found a worldwide audience with their dazzling take on progressive flavored metal.

As you can see in the photo at left, the band wore masks during their earlier years but abandoned the look before the 1990s. If they had any contemporaries during their original run, they would have to be Queensrÿche and Fates Warning. Like both of those bands, Midnight and Crimson Glory hailed from the United States but their elegant way with melodies and layered arrangements owed more to European bands like Judas Priest, Mercyful Fate, and early Scorpions.

Crimson Glory's 1988 release, 'Transcendence' is undoubtedly the group's magnum opus. The album remains one of the touchstones for melodic metal all of these years later. Its 10 songs are filled to the gills with one stunning riff and vocal performance after the other. Midnight's prowess in the recording booth knew no bounds. On songs like "Lady of Winter" and the piercing "Red Sharks," he moves through the material with the controlled force of a classically trained vocalist. He also had a distinct tone to his higher range notes that set him apart from many of the guys coming up at the time.

Unfortunately Crimson Glory would abandon their metal sound for a streamlined rock direction on their next album, 'Strange and Beautiful.' Whether it was a calculated move to try and gain airplay or simply an organic stylistic shift, the change didn't do any favors for the band. Midnight left the fold soon after and the group moved on with another vocalist. Sadly the metal world went without any new Midnight fronted music for almost a decade but then re-joined Crimson Glory in 2005. He was then was kicked out of the band a couple of years later. He also struggled with alcohol related issues and even got arrested for DUI in Sarasota, FL.

Midnight did manage to release sporadic solo material throughout the last few years of his life and an album entitled 'All Souls Midnight" came out in 2008. But it will be his influential work in Crimson Glory that will keep the singer in the hearts of metalheads from Brooklyn to Berlin for years to come.

Check out his jaw-dropping performance on 1988's "Lonely" below.